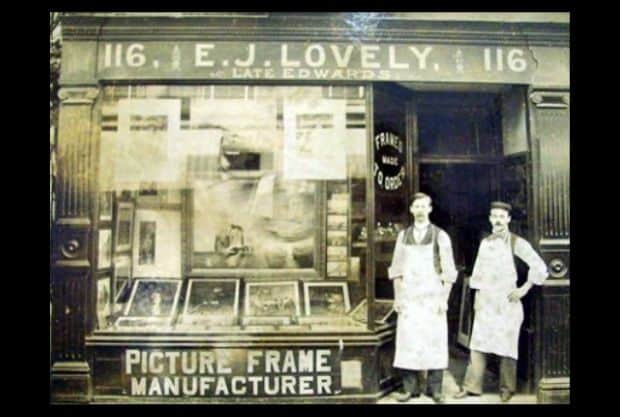 Art, talks and prosecco will mark 130 years of Lovelys – The Isle Of Thanet gallery

Lovelys Gallery in Northdown Road, Cliftonville, will celebrate its 130th anniversary with events including a party and an interactive storefront.

The Lovelys Gallery and Art Shop was established in 1891 by Edward Lovely. It is still owned and managed by the Lovely family and offers original and limited-edition works of art displayed over two floors, a specialist bespoke framing and catering service as well as an extensive art materials department.

Edward Lovely opened the first store in Margate High Street. He was one of the first traders to import lengths of picture moldings from Germany, a revolutionary step at the time.

Lovelys remained open during the two world wars despite the bombing of the Margate store. Edward’s son Henry, also in the business, was a master of the Fine Art Trade Guild and is said to have designed the trade logo, still in use today. He met many famous artists including LSLowry and Walter Sickert also dated Lovelys. In the 1950s, Henry Lovely was fortunate enough to be asked to restore a painting attributed to Rubens.

The current Northdown Road store was purchased in 1951. Henry’s son John joined the business after training at the National Gallery. In 1970, the Margate and Ramsgate stores were sold and the Northdown Road site was considerably expanded. The store is now run by the fourth generation of the Lovely family, Caroline.

Lovelys, who was named Art Retailer of the Year in 2011, recreated the 1891 storefront to mark the anniversary

On July 17-18, Lovelys will celebrate with special events, deals and cakes and prosecco alongside the Northdown Road and Friends Summer Open Party.

As part of the anniversary, Lovelys will host The Lovelys Living Gallery – an interactive showcase where artists, patrons and passers-by are invited to create their own artwork on the walls inspired by iconic local landmarks. It takes place from Wednesday July 14 to Sunday July 18.

Visitors to the shop can also see the striking mural created by artist Rory Strudwick, which was commissioned by Lovelys to mark the anniversary year.

The Lovelys summer exhibition: ‘The Lovelys Art B&B’ is also on display until Saturday August 28 and embraces the Great British staycation, celebrating the art of our local coastline and seaside towns as well as summer adventures and local hidden treasures!

In parallel, an exhibition: “A quiet life at the Lido”. Nick Evans, author of “The New Town on the Cliffs, The Story of Cliftonville,” will be exhibiting his collection of photographs and memorabilia from the Lido, documenting 60 years of Lido history from the 1920s to the 1980s. Nick will be signing books Saturday July 17 from 2 p.m. to 4 p.m. and the exhibition will remain visible until July 28.

On Sunday July 18, Lovelys is hosting a talk by Graham Ward in conversation with author, broadcaster and artist Nick Kelly. Graham and Nick will discuss their respective techniques, influences and inspirations.

They will also talk about a shared experience of traveling the various pilgrimage routes to Santiago de Compostela in northwestern Spain, starting from the oldest and most established French route – a journey of nearly 800 miles from the foothills of the French Pyrenees to Galicia. Graham discusses his long-standing passion for the subject and explains why Santiago’s experience remains an important and underlying influence in his work. Reservation is required due to limited space, Â£ 2 per person.

The celebrations will also be marked later in the year with an open exhibition showcasing 130 individual works of art by local, national and amateur artists. The exhibition will offer people from a multitude of disciplines and mediums the chance to show their work to Lovelys, perhaps for the first time! The show will feature popular Lovelys past and present performers and will run from Saturday September 11th through Saturday October 9th.

Submission forms can be downloaded from the link below: https: //www.lovelysgallery.co.uk/_resources/lovelys-130-submission-form.pdf

All the money raised through the cost of hanging the exhibition will be donated to the Pilgrims Hospice charity.

South Kensington: How the zeal of Prince Albert and the Victorians transformed one of London’s biggest neighborhoods

Brexit: why Northern Ireland might learn to love the Protocol