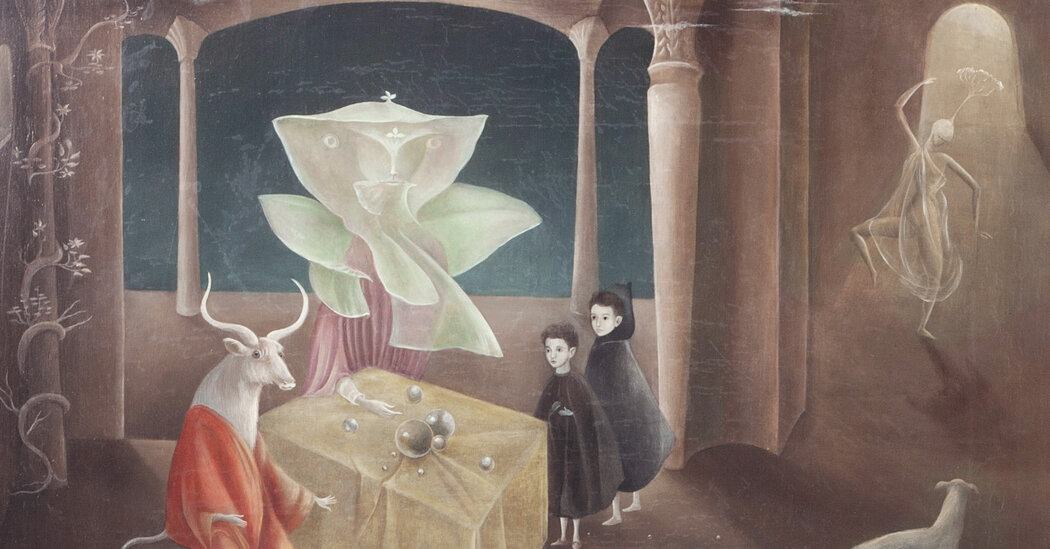 Desmond Morris, now 94, is well known in Britain as a zoologist, author of more than 40 books and a ubiquitous TV presence on all animal matters. A leading academic ethnologist, Morris became a household name thanks to his gargantuan 1967 bestseller “The Naked Ape: A Zoologist’s Study of the Human Animal”, which sold some 20 million copies and was translated into 23 languages. Morris also showcased the monkey’s creative abilities and held a successful exhibition of their paintings. Certainly, his star chimpanzee, “Congo”, proved that this was more than a publicity stunt; Picasso is said to have possessed one of his explosive abstractions, the excellence of which still serves as a convincing refutation of anthropocentrism.

Mainstream stardom rather eclipsed Morris’ long career as a painter and even his life as a proudly doctrinaire young surrealist, who joined the movement in London in the 1940s and then, armed with André Breton’s phone number, went traveled to Paris to search for surviving surrealists. Morris had a two-person show with Joan Miró in 1950, made surreal short films, and collected the art of many of his most radical contemporaries. These are surprisingly forward-thinking references for an eminence, much like discovering that David Attenborough was a member of the Situationist International.

In 2018 Morris published “The Lives of the Surrealists”, and this follow-up volume also features 34 artists sought or too British to be included in the earlier collection. As Morris admits, “it’s not an analysis of their work – surrealists don’t like their work analyzed – but rather a series of pen portraits.” And the most enjoyable of these turns out, each pleasingly modest at just a few pages, concise and airy reading accompanied by luscious color reproductions. Some are famous—Francis Bacon, Henry Moore, Graham Sutherland—and many others are delightfully obscure, such as Oscar Mellor, Sam Haile, or John Selby Bigge. But all here are perfectly captured, dissected, analyzed and brought to life.

Each profile begins with a list of dates, places of residence and “partners” of the artist, which gives an idea of ​​how big were such lives, each a litany of exotic locations matched by a profusion of lovers and spouses. Surrealists still have their strong anecdotal energy, and these Anglo-Saxon iterations don’t disappoint, from the outrageously rich (there are a surprising number of drivers mentioned, as well as a Rolls-Royce Phantom II) to the desperately poor, walking barefoot while surviving on rabbits and rice pudding.

We learn that Peggy Guggenheim is in a race with her sister to sleep with 1,000 men, how Roland Penrose, host of London’s landmark 1936 Surrealism show, “can’t do it without handcuffs.” There are girlfriends 50 years younger, husbands 25 years younger, satanic parties, mescaline lawsuits and countless threesomes. We read the story of the blind, suicidal director of a Hong Kong bank, an artist with an artificial leg named “Gilbert”, a man who sold windmills in Argentina, a baronet turned ” mule inspector” and Leonora Carrington, whose old nanny was sent by submarine to escort her from her Spanish psychiatric hospital to one in South Africa, who covered his feet in mustard and showered fully clothed.

Morris himself was consulted by Bacon about whether a baboon he had painted was realistic; Moore wanted to discuss animals with him; and John Banting invited him to the Museum of Natural History to discuss biomorphs. (“Unfortunately for me, the meeting never happened.”) Every reader will surely regret not having met any of these dazzling characters and only wants to try to find a chance to meet this last, and not the least, of the original British characters. Surrealists.

Adrian Dannatt is the author of “Doomed and Famous”.