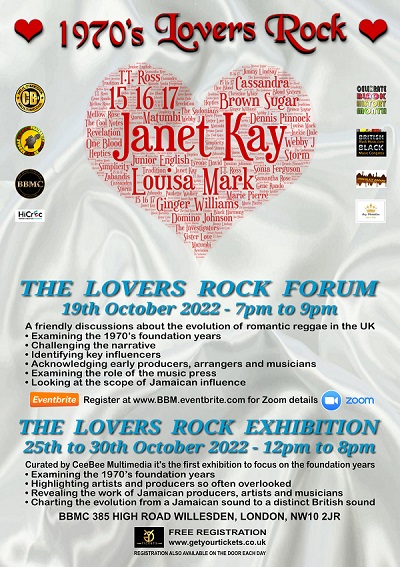 A Zoom exhibit and discussion aims to dispel some of the dominant lovers in rock history.

1970’s Lovers Rock Exhibition is the first exhibition to focus on the heady 1970s in the history of the reggae genre. It is organized by CeeBee Multimedia aka Colin Brown, who is a presenter for Chaaawaaa Radio, a leader of Reggae Fraternity UK and a key supporter of International Reggae Day UK.

Disenchanted with much of what he saw as widespread but apocryphal rock lover stories, often written by journalists and historians outside of reggae and the British African community, Brown decided to put things right.

The exhibition will highlight both artists and bands that have so often been overlooked, as well as the most successful artists of the era, like Janet Kay of “Silly Games” fame.

The exhibition takes place at Theorem Music Village, formerly BBMC Rehearsal Studios, known as the Home Of Reggae Music, due to the many Jamaican and British reggae artists who have rehearsed and recorded there. These include Dennis Brown, Gregory Isaacs, Alton Ellis, Horace Andy, Carroll Thompson, Peter Hunnigale and Sylvia Tella.

The venue is in Willesden, which is next to Harlesden in the Borough of Brent, northwest London, which claims the title of Britain’s reggae capital.

The exhibition, which marks Africa History Month, begins with an invitation-only press and industry preview on October 24. Access is free for the general public from October 25 to 31.

Visitors to the exhibition will see panels and artefacts that show the timeline of when UK-based reggae artists and bands released their first love rock records. It also traces the evolution of the genre from a Jamaican sound to a quintessentially British sound – from romantic reggae to British love rock.

The exhibit is just one part of trying to put rock in love on a solid historical footing. So while visitors will also have the opportunity to engage with the author, who will be on hand to give talks from 2-3 p.m. and 6-7 p.m., there is also a Zoom meeting before the exhibition, to discuss of the history of 1970s lovers rock and clarify some of the inconsistencies and controversies.

The Lovers Rock Forum – 1970s Revealed on October 19 will be led by Brown and historical musicologist and UK International Reggae Day organizer Kwaku. It will be an enlightening and revealing discussion, which offers the opportunity to (re)discover or confirm the facts about the rock lovers of the 1970s.

While conventional wisdom casts rock lovers as an invention of London, UK, which began in the mid to late 1970s, this exhibition will highlight the little-recognized Jamaican input and show why 1972 is the year to celebrate 50 years of loving rock.

Confusion over the start of the genre may be because the label that gave the genre its name – South London-based Dennis Harris’s Lover’s Rock – released so many records in 1977/78, which are now love rock staples like Brown. Sugar, Winston Groovy, Cassandra and TT Ross.

However, the likes of veteran record producer Clem Bushay regard 1972 as the start of UK-produced romantic reggae, which became known as love rock later in the decade.

He asserted his position at the 2020 International Reggae Day Zoom meeting in London, UK, where he showcased his 1972 production of Domino Johnson’s ‘Summer Time’ as an example of the first love rock record produced. in the country.

Other examples of 1972 releases to discover in the exhibition are “I Can’t Resist Your Tenderness” by Ginger Williams and “Breakfast In Bed” by Winston Reedy.

You can expect to find exhibits of vinyl records, artist/band merchandise, record covers, magazines, posters, and other artifacts in the exhibit. The What About the Untold Half section lists several little-known historical facts. There is also a section that documents influential Jamaican artists and records from the UK lovers rock scene, including Jamaican producers and musicians who played on some of the London recordings.

Kwaku is a historical musicologist and the organizer of International Reggae Day UK.

Everything is ready to organize IDEAS next month