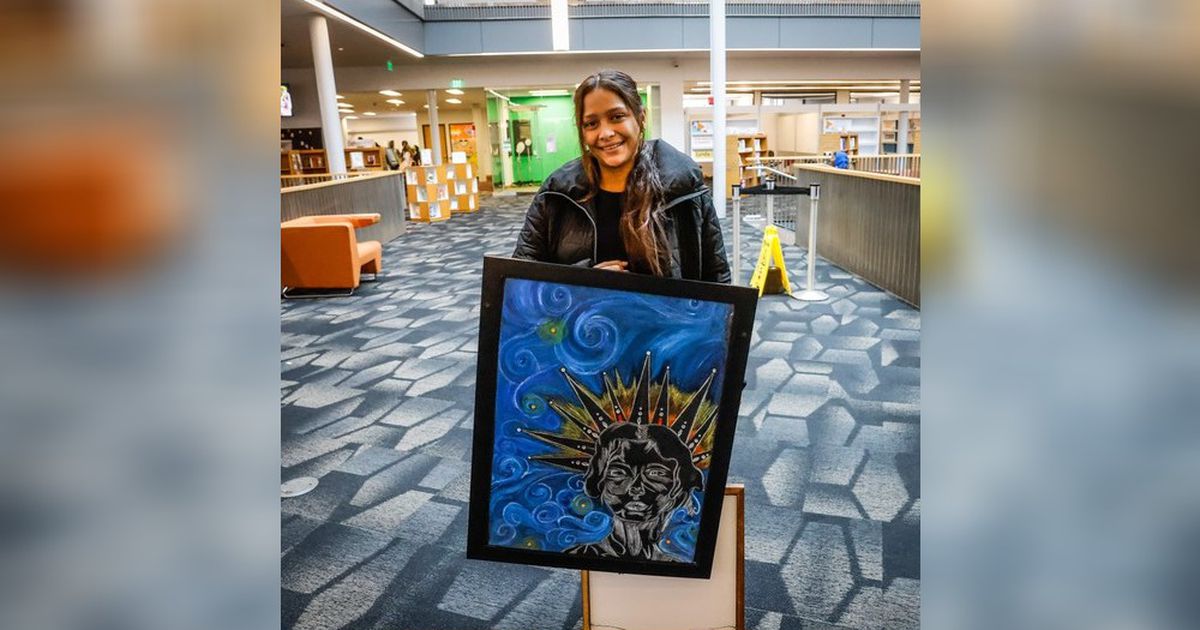 It was the “exploding head” emoji that inspired artist Guustie Bouten Alvarado to create the fused glass artwork on display at the Dayton Downtown Subway Library.

Alvarado is one of the New Americans whose work is featured in an ongoing exhibit on the second floor of the Downtown Library. The exhibition, which also features works by Dayton International School students, will be on display until December 31.

When she heard about the call for artwork for the library’s New Americans art exhibit, Alvarado thought of emoji. She emigrated from the Netherlands in 1981 and says she and her husband – whom she met when he was a student at the University of Dayton – returned to the Netherlands in 1998 because she had the homesickness. “Then we came back here because my husband, a Colombian immigrant, was homesick for the United States,” she says.

The attraction between two countries is reflected in the glass piece that Alvarado calls “mul-ti-cul-tur-al”. “I try to show the cultures hidden inside the mind of an immigrant, a whole world that is not seen by non-immigrants,” she says, referring to her piece of fused glass. affixed to a painted background. “When I saw the emoji with the brain exploding, that’s exactly how I sometimes feel as an immigrant. When I’m in Holland, I’m not Dutch anymore; when I’m in America, I’m not not like a real American. It’s like there are two cultures in my head, like I’m fragmented. I almost believe that every immigrant has a hidden culture in their brain. It doesn’t matter how long I live here , my culture will always be there and will define me.

Gabriela Pickett, the Dayton Metro Library’s newest American specialist, coordinates the art exhibit and is also responsible for supporting the library’s 17 branches. “My role is to provide support to immigrants by promoting equity and access to resources, including teaching English as a second language,” she explains. “I also empower people by facilitating cultural celebrations that allow them to experience their own culture and simultaneously enhance the host community.”

Pickett, who emigrated to the United States 33 years ago and calls Dayton home for 22 of them, says she hopes to be the thread that ties the cultural fabric of Dayton together and makes it a much more colorful community. .

In addition to three ESL classes each week, Pickett says the library and its branches have hosted everything from immigration law clinics and storytelling exchanges to a World Refugee Day.

A large mosaic of artwork made by students in grades four through eight of the new Dayton International School at Residence Park was submitted by their art teacher, Judy Campbell White. “Between 40 and 50 of my students used a circular shape to create their own ideas and express how they felt,” she explains. “Then we pieced it together into one big collaborative piece.” Its students speak several languages ​​and come from all over the world, including Congo, Uganda, Colombia, Mexico, Ukraine, Russia and Afghanistan.

High school students Lina Maria Gil Sanchez from Colombia and Nicolle Rodriguez Lobo from Costa Rica will also be represented in the show.

“I love expressing myself through art because I don’t always feel comfortable communicating my feelings through words,” says Nicole. “I prefer to express myself through drawing and painting because it’s more natural for me than talking about my emotions. She exhibits a watercolor of butterflies. “At first, I just wanted to let off steam, so my drawings had cold, dark colors,” she notes. These days, she says, she paints more colorfully, expanding her subject and painting with materials she hadn’t used in the past.

Lina says she is inspired by everything around her. “I am inspired by every situation I find myself in – from the pastures, to the sky, to the rain, to the trees. For me, nature is everything – just like love.” Lina explains that the person depicted in the one of his drawings can see through one eye, the other eye is hidden.” It’s almost like showing that a person can be part of reality, and that part of that person will also always remain hidden “, she explains.

An enthusiastic Pickett says, “My work is proof that today’s libraries go beyond books. We pay attention to the ever-changing needs of our new community and try to meet them.

HOW TO GET THERE:

Where: Dayton Downtown Subway Library, 215 E. Third Street. The exhibit is on the second floor of the library, next to the community hall.