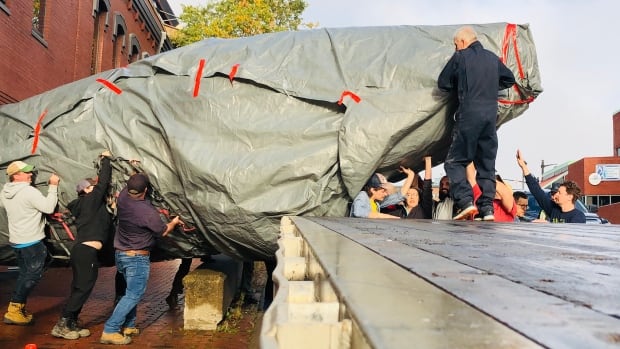 Many of the New Brunswick Museum’s artifacts have been in storage since its Market Square location in Saint John was emptied in October, but Delilah the Right Whale has found a new place to hang.

The 13-metre model of the North Atlantic right whale whose death led to conservation efforts in the Bay of Fundy will be part of a new exhibit at the Fundy Discovery Aquarium at the Huntsman Marine Science Center in Saint Andrews.

The model previously hung from the ceiling of the New Brunswick Museum’s exhibition space.

“So that we can expose it, [to] to show how big right whales are, and also to tell the story of right whales and their life cycle and all the struggles they have – that’s really important to us,” said Laura Barrett, supervisor of education and outreach and youth education specialist at the center.

The new exhibit will launch in May 2023, Barrett said. He will explore the whales of the Bay of Fundy, including the North Atlantic right whale and other species.

The center will also house a model of a beluga and calf from the museum. The museum also has Delilah’s real skeleton, but her bones will remain in storage until she finds a new space, Barrett said.

Delilah’s importance to the Bay of Fundy

Delilah has yet to be hung in the center, but Danielle Dion, senior naturalist with whale-watching tour provider Quoddy Link Marine, recently got a glimpse of the model in her new habitat.

“I’m on the water all day with them, but to see them out of the water, to see their size, it’s amazing,” she said. “And when Delilah gets hanged in the Fundy Discovery Aquarium, people are — their jaws are going to drop to the ground.”

Barrett said it was new for Huntsman to have a model this size.

Dion said Delilah is an important whale to the Bay of Fundy because of the conservation efforts inspired by her death.

In 1992, Delilah was killed in what is called a ship strike, meaning she was hit by a boat or ship. As a result, shipping lanes in the Bay of Fundy have been relocated around right whale habitat, she said.

“It went from, you know, 80% of right whales that were in the Bay of Fundy being right in the middle of shipping lanes to less than 5%,” Dion said. “So it’s a huge conservation effort that has been made.”

She noted that right whales are rarely seen in the Bay of Fundy these days, but diverting shipping lanes still helps protect other wildlife.

The outlook for right whales may look bleak, she said. A consortium of North Atlantic right whales recently announced that the species’ population had fallen to 340 in 2021.

But Dion said Delilah’s story demonstrates that humans can do something to reverse the man-made threats facing the species.

She said it was important for her survival to have places like Huntsman where people can learn about the species.

Displacement of a model of 13 meters

The transport effort was aided by Cooke Aquaculture and futureNETS, an aquaculture net supplier. The model was stored in a futureNETS building after the center removed a door and windows from one of its walls so Delilah could do it inside.

A crane lifted her off the set, then approximately 20 Huntsman staff members carried Delilah’s 13 meters to the center.

Barrett said Delilah is relatively lightweight for the size of the model. The model is made of fiberglass and wood.

Delilah’s fluke, ie her tail, and her fins had to be removed in transit but will be added in the coming weeks.

The aquarium closed its summer season in October and will reopen to general visitors in May.

But once Delilah is back in one piece, she’ll be hanging from the ceiling. That means people visiting for special events or during March Break can catch a glimpse of it before the new exhibit opens in May.

“We are very happy to be able to present Delilah,” Barrett said.

What is the processing time for FERS disability claims?