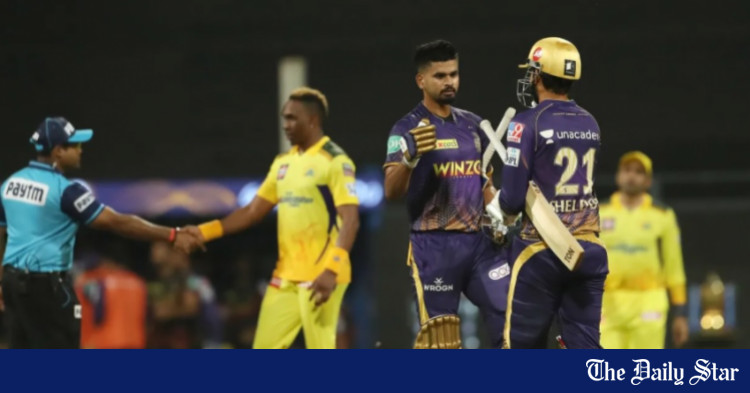 Mahendra Singh Dhoni rolled back the years with an unbeaten 50 from 38 balls but his side Chennai Super Kings fell to Kolkata Knight Riders by six wickets in the IPL opener on Saturday.

Dhoni, 40, who handed over the captaincy to Ravindra Jadeja on Thursday, took Chennai from a shaky 61-5 to 131-5 after being batted in Mumbai.

For all the latest news, follow the Daily Star’s Google News channel.

Kolkata hit their target in 18.3 overs with new skipper Shreyas Iyer unbeaten on 20 at the start of the Indian Premier League. Ajinkya Rahane had the highest score with 44.

“There is always tension when MS Dhoni strike, especially in the last three overs when the dew comes,” said Iyer, who succeeded England’s Eoin Morgan as team captain. “We just have to keep our momentum going from here.”

Dhoni, a veteran wicketkeeper, took his time getting into Season 15 of the Twenty20 tournament but went on an unbeaten 70 with southpaw Jadeja, who made 26, and the pair got 47 on the last three overs.

Dhoni, who led Chennai to their fourth IPL title in the blockbuster Covid Twenty20 tournament ended in the United Arab Emirates last year, broke seven fours and a six to revive the limited crowd at Wankhede Stadium.

It was Dhoni’s first half-century since April 2019 when he crushed 84, albeit in a losing cause against Royal Challengers Bangalore.

“Granted getting points in the tournament is positive, but it was quite a rusty performance (from the team),” Chennai coach Stephen Fleming told reporters.

Fleming revealed he discussed the captaincy change with Dhoni last season and admitted the team will be going through a “period of transition”.

The cash-rich tournament was expanded to 10 teams and 74 matches, but league matches would be limited to four venues in Mumbai and Pune.

The Delhi Capitals will face the five-time winners Mumbai Indians in the opener on Sunday, while the Punjab Kings will meet Bangalore in the evening game.

Teacher of the month: Melissa Gerard