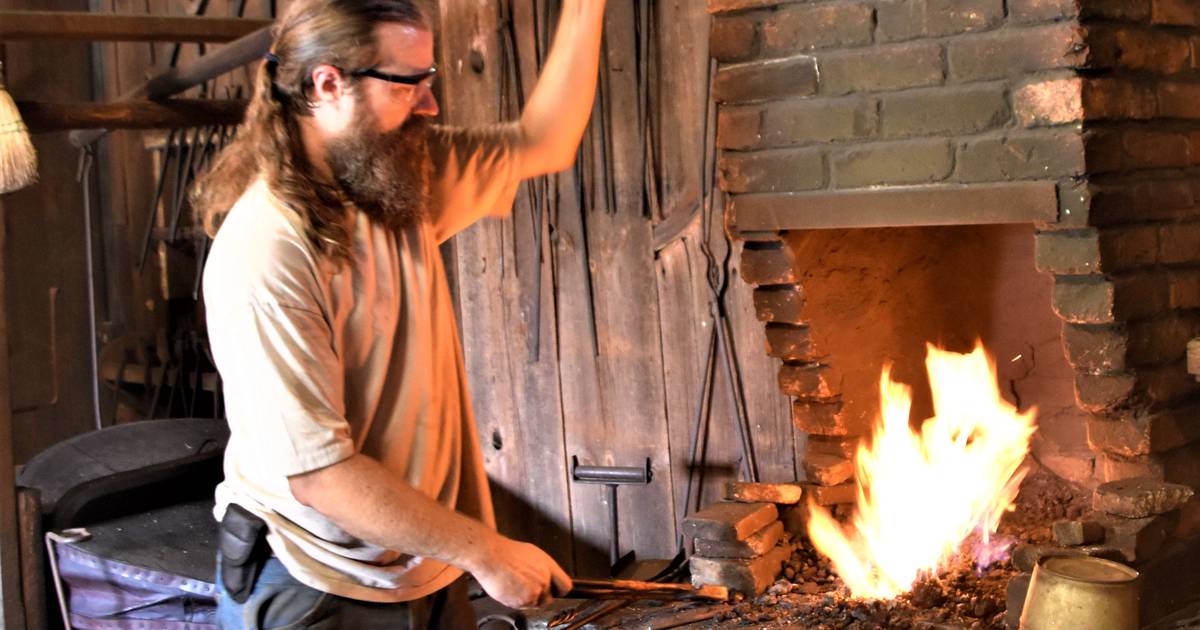 Local Taneytown blacksmith Jacob Selmer and his wife Red, a lamp maker or glass bead maker, are two of the incredible artists featured at the Taneytown Heritage and Museum Association, which is hosting an exhibition of local arts and authors – past and present – ​​titled “Creative Talent of Our Community” through Nov. 20. The museum is located at 340 E. Baltimore St. and the exhibit is open Fridays from 10 a.m. to 1 p.m., Saturdays and Sundays from 1 p.m. to 4 p.m.

“We try to reach different groups of people in the community,” said Nancy Ensor, exhibit coordinator. “Each year we have a room that we use for a changing exhibition. It was time to recognize Taneytown’s creative talent. There are 45 artists in this exhibit from a wide range of media including oil painting, blacksmithing, bead making, watercolor and sculpture. The authors are also introduced.

“Our criteria for designing an exhibit is based on what the community is willing to lend us. Then you have to make it consistent. We try to promote the history of Taneytown,” Ensor said.

Jacob Selmer started working with metal at the age of 16. “I wanted to make armor. It was the kind of stuff we learned in school that included medieval times. Selmer said.

“That’s how I started working with metal. I made some armor. The first costume was chain mail. Chain mail is made from iron wires woven together to form armor. The costume has to be tailored to fit,” Selmer said. He used steel electric fence wire. He researched online and learned how to make jigs and his own tooling to bend wire. A template guides the tools to make them more precise.

Selmer wore his armor to school and to Renaissance and Celtic festivals. Many people wanted him to make costumes for them, he said, but it took too many hours. The first costume took him all summer to make.

Selmer wanted to make plate armor, but more specialized tools were needed. This brought him to the forge so he could make his own tools. He set up a small forge in his parents’ garden. His parents were very supportive. Selmer lived in Fairfax County, Virginia, and when he was just 17, he demonstrated at Colvin Run Mill. When there was no audience there, he taught himself and was constantly learning and practicing.

Much of Selmer’s early learning came from the internet and books. He made many of his own tools. He has plate armor that he crafted. “Since I need less armor than tools, I make more tools than armor now,” he said.

Selmer attended Virginia Tech and studied mechanical engineering with a minor in history. In 2006 he got a job with General Dynamics Robotic Systems in Westminster and moved to Keymar with his wife. He is now responsible for product engineering at Knorr Brake Company.

Receive the main news and sports headlines of the day.

Selmer is active with the Blacksmith Guild of Central Maryland and is a blacksmith master with the guild. “I work with the new people to make sure no one burns down the building,” he joked. He gives advice, shows them different techniques, explains how to use the tools safely and also gives lessons.

Selmer is starting a small business teaching classes at his Taneytown property studio and was selected as a finalist in this year’s Carroll Biz Challenge presented by the Carroll County Chamber of Commerce. His company is called Selmer Ironworks.

Selmer recently participated in the annual Blacksmith Days at the Carroll County Farm Museum. One of the competitions was to make a candlestick. He made a medieval-style candelabra and won. His design was influenced by his love of history and the Middle Ages as well as his love of ironwork.

“I really like the history of technology and manufacturing,” Selmer said. “As an engineer, I like to study how things are done. With blacksmithing and handwork, you can add so much more detail and personality than you get with standardized machines. I would like to make more armor and study the different periods and how they work.

Selmer and his wife Red will be taking part in the Carroll County Artist Studio Tour this year. Selmers studios are at 5823 Conover Road in Taneytown.

Selmer also sells his blacksmith works at Offtrack Art in Westminster and the Carroll County Farm Museum gift shop. His work can also be seen online at Selmerironworks.etsy.com. He can be contacted at [email protected]

Lyndi McNulty is the owner of Gizmo’s Art in Westminster. His column, An Eye for Art, appears regularly in Life & Times.