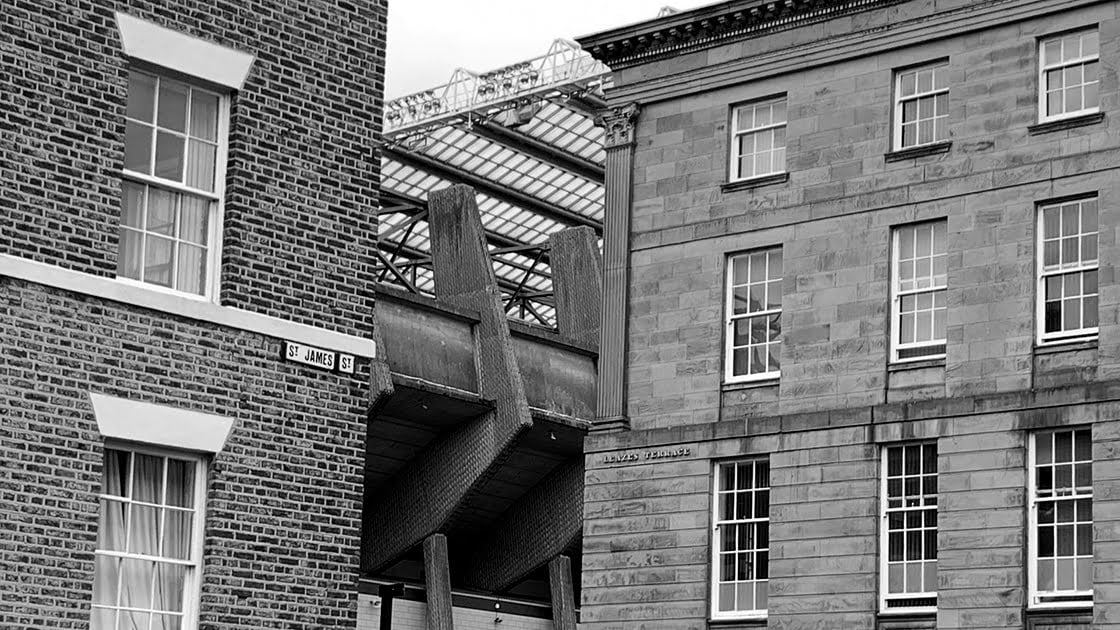 I recently visited the Design Museum in Kensington High Street to see an exhibition called Designing the Beautiful Game. The whole family plus my son’s best friend. It was a superb exhibition, everyone agreed.

There was a section devoted to the architecture of the stadium. A fascinating look at stadiums around the world throughout history.

Living in London for a while now means I’ve visited a fair number of Newcastle supporting grounds or visited lower league games just to get my football fix.

Archibald Leitch was the architect behind many of the classic structures we associate with 20th century football stadiums with that very recognizable style of columns and steel A-frame beam structures supporting pitched roofs. The Taylor Report meant that many of Leitch’s stadium designs had to be rebuilt, so many disappeared to be redeveloped.

There has been a lot of talk about expanding St James’s Park or moving to a new purpose-built arena. Several of the big clubs in London have brand new grounds as the old stadiums were not up to the standards of the 21st century.

West Ham’s Boleyn Ground which I have visited many times over the years, always enjoying the intensity of the atmosphere generated by the fans in the old stadium and the closeness of the supporters to the pitch. But not the queue for the tube afterwards.

My last away game in London was at the Olympic Stadium to see Newcastle play and my son had a water bottle thrown at him by a crazed local fan (character creation for the boy!). I work with a few West Ham supporters and they hate their new home. I couldn’t agree with them more, it’s an awful place. Certainly not a football stadium.

I also work with someone who is from Blackburn (my boss) and he is a West Ham season ticket holder. Justifies him by saying he can see all the stars from the top six teams. One wonders how many more of their supporters are like him.

Highbury Stadium which I have had the pleasure of visiting several times over the years and have always loved that it is set comfortably amongst the Victorian terraces, with its own dedicated underground station which was once called Gillespie Road, but Herbert Chapman convinced the powers that be to change it. at Arsenal. I even saw Shearer win there and so on. (you don’t often see a lot of wins in the capital), I liked Highbury with the old clock incorporated into the Clock Stand. This is where I was arrested once for drunkenness and disorder five minutes before kick-off. Much to the amusement of my comrades at Gosforth, even though I wasn’t drunk or disorderly, but just sat at the end of the row, so it was an easy selection for the police.

Highbury now houses accommodation but the 1930s Art Deco facade has been retained. Arsenal’s new home, the Emirates Stadium, which I’ve visited several times as well and is adjacent to where Highbury used to be, so it retains some of the local feel. The Highbury replacement is a quality piece of architectural design. The atmosphere does not compare to the old Art Deco Highbury in my opinion. The stadium is lifeless and could be anywhere. Certainly not the inspiring structure envisioned by the architects.

Just before Covid I managed to get Spurs tickets to the new Tottenham stadium. Extremely surprised to see a Joelinton goal and questionable VAR in our favour. The stadium is another fine feat of architectural engineering. Same usual trip to Seven Sisters and the long walk to the ground. I’ve done this route several times to get to the old White Hart Lane.

Spurs had their stadium rebuilt whilst playing at Wembley (my son and I visited Wembley to see Spurs defeat us by a single Son goal) White Hart Lane with their shelf was much more intimidating than Tottenham’s stadium . The architects had hoped to create a “blank wall” at one end, but you can’t conceive passion in a building.

Which brings me back to St James’ Park.

What lessons can we learn from the two big clubs in north London?

Can we expand St James’ Park to increase capacity?

I read an article in The Economist the other day that explained how scientists and engineers had been experimenting with new materials, mostly by using graphene, a relatively recently discovered material, and incorporating it into concrete, creating thus opportunities to advance architectural development.

An Archibald Leitch for the 21st century must step forward so that we can rebuild and expand St James’ Park.