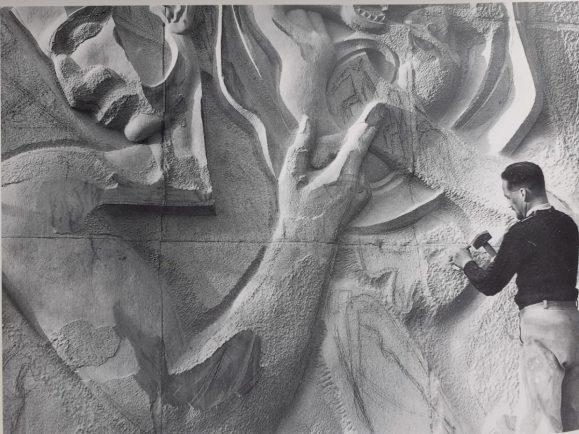 THIS weekend is the last chance to see a major exhibition highlighting a forgotten piece of the region’s heritage.

Modern Mercia: Post-War Art in Coventry and Warwickshire 1945-1970 will end on Sunday 19 September.

The exhibition showcases the best of the region’s post-war creativity as part of the University of Warwick’s Resonate Festival.

The multimedia visual arts exhibition is inspired by the reconstruction of the post-war city and celebrates the artistic ambitions of an avant-garde region, as well as its emergence from a troubled era, through 60 exhibitions including sculptures, household items, photographs and archival films. borrowed from local collections and private lenders.

It also explores the emphasis in Britain in the 1950s and 1960s on the importance of art in everyday life, especially at home and in schools, and the form it took in the Midlands. This includes textiles and ceramics by designer Tibor Reich, whose Stratford-based textile company was internationally renowned and produced designs for Coventry Cathedral and Concorde, among others.

The large-scale works, each revealing a unique aspect of 20th century life, thought and politics, have been brought together at the Leamington Art Gallery and Museum through collaboration with a number of local collections, including the Herbert Art Gallery and Museum, Coventry Cathedral. , the University of Warwick and private lenders.

The exhibition was curated by Jane Simpkiss, Curator of Visual Arts at the Leamington Art Gallery and Museum, and Louise Campbell, Emeritus Professor of Art History at the University of Warwick, and is free.

Professor Campbell said: “The modern Mercia was organized with the aim of encouraging people to reflect on an era of art, design and creativity that may soon be lost to redevelopment, and represents a vital chapter but often overlooked in the history of Coventry and Warwickshire.

“This is a perfect opportunity, during the celebrations of the cultural city of Coventry and the Resonate Festival at the University of Warwick, to get people to reflect on their connection to the region and its fascinating post-war past. and in turn to consider the history left by today’s art.

“In addition to the reconstruction of Coventry, it will also detail the emergence of Stratford-upon-Avon as a cultural center and the growth of the Midlands as a thriving manufacturing center.

“Not only do the people of Coventry and Warwickshire appreciate it, but it is also a fascinating prospect for students and secondary school pupils, who will have the chance to see the art left by their predecessors in the colleges and institutions of the city more than half a century ago. “

Visit www.warwickdc.gov.uk/royalpumprooms for more information on the events.

Indonesia seeks to boost trade with Taiwan at exhibition

Art to see in Paris this fall