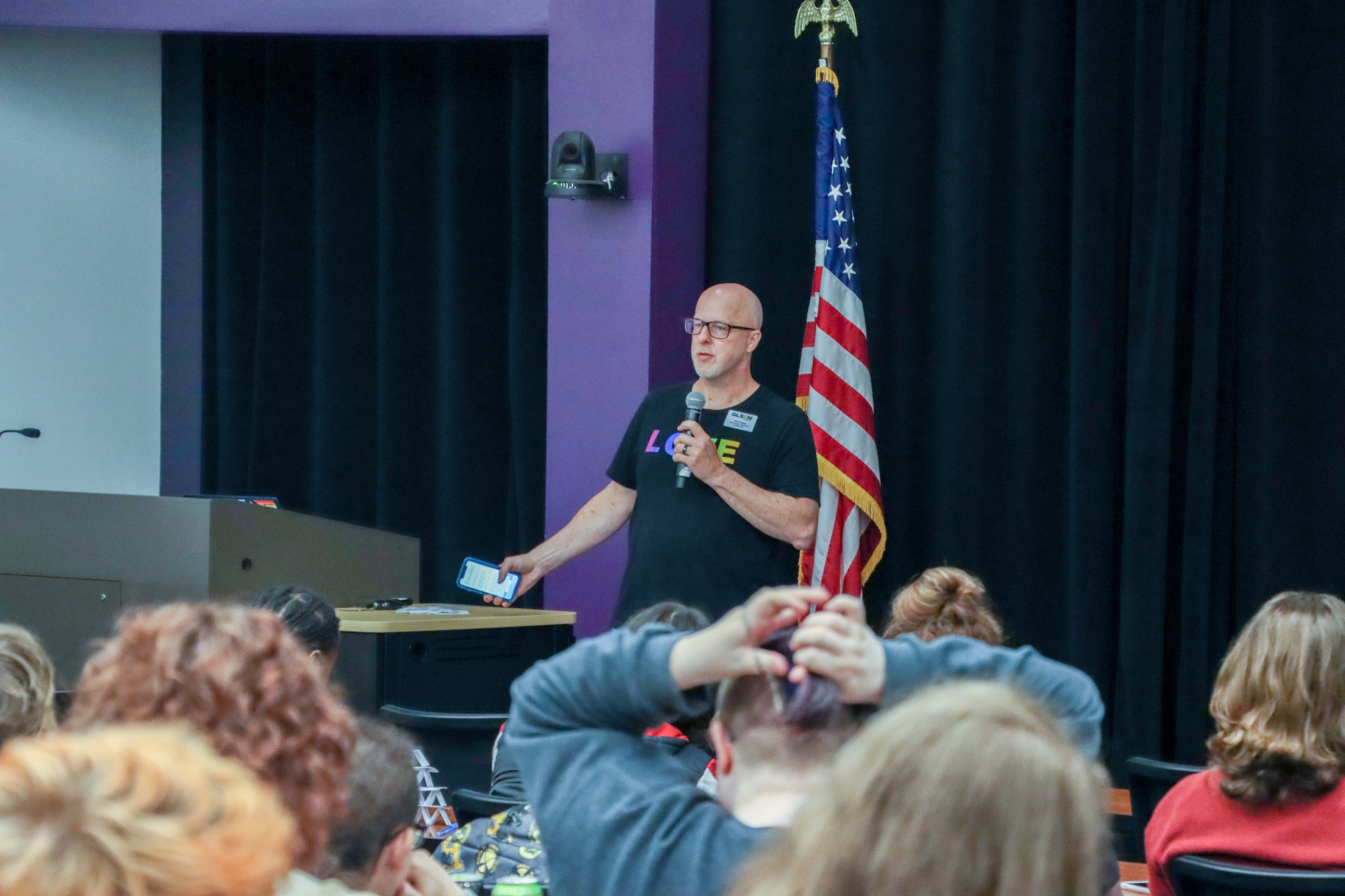 The event, held at the Student Union and Morrison Family Multicultural Student Center on April 22, included an art exhibit, nine sessions over three blocks, and a keynote speaker.

Michael Larson, a graduate student in drama therapy, helped organize the event, reaching out to Kansas schools and community organizations.

“Finding every middle school and high school in the state of Kansas was our first step and spreading information through emails and phone calls, as well as posting graphics on social media,” Larson said.

Dr. Tori Gleason, a graduate student in the Masters of Public Health program at the University of Kansas School of Medicine in Wichita, delivered her keynote address midway through the event. She spoke about her struggles growing up, being exposed, and the issues the LGBTQ community faces with health care and the laws surrounding it.

“I was in therapy with an art therapist, and they recommended I do an article about support,” Cruz said. “To me, that meant community.”

Cruz attended the conference alongside their works. They said their highlights of the event included the keynote speaker and a presentation titled “I’m Very Tired of Cisnormativity” by Sam Sharpe, a graduate student in biology and a member of the Gender Collective.

During the third block, student leaders from the K-State Sexuality and Gender Alliance, Gender Collective, and oSTEM organizations discussed panelists’ positions on issues centered on the LGBTQ community.

“[The crowd] asked questions about “How can teachers and professors work better with students to create queer spaces?” or ‘How do you get gay people to come to GSA meetings?’ said RJ Salmen, a sophomore in personal financial planning. “It was just a conversation between us and the crowd of 30-40 that was there.”

Salmen is a member of the Student Governors Association as a senator and a member of the Gender Collective as a board member. They talked about SGA’s new Strategic Oversight Committee and its role in sustaining initiatives.

“The committee creates reports and a documentation system where their reports include background information and actions taken by students,” Salmen said. “It contains a list of achievable steps that we have proposed.”

Salmen said the committee would help push through issues with the university, such as gender-neutral bathrooms, that would otherwise be overlooked.

“Many people have explained that the administration outlives the students when it comes to issues, because we’re usually only here for four years,” Salmen said. “I think that [it’s] a very good solution to fight against the institutional problem of the disappearance of knowledge.

The conference concluded with Will Rapp, statewide organizer for GLSEN Kansas, asking attendees for one-word experiences and sharing a quote from the late poet bell hooks on power.

Cruz said the event benefited students from the LGBTQ community.

“I think it gives students the opportunity to see role models of successful people from the queer community,” Cruz said. “Growing up, I felt like I didn’t have a lot of role models, so this is an opportunity for that.”

More information about the LGBT Resource Center is available on the organization’s website.