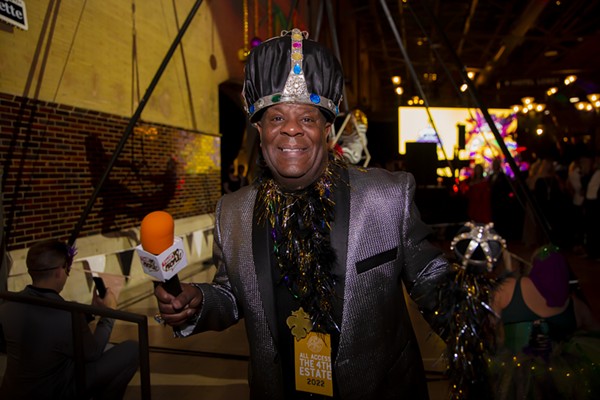 As host of They, people! Local TV star Gary Boyd is the underground king of St. Louis. Better known as “Mister Gary,” Boyd has hosted the show since 2013. He travels around St. Louis and surrounding areas to introduce viewers to a slice of the St. Louis experience.

The people featured on his show are relatable (they are your people, after all) and often wildly funny. Boyd seems to bring out the best in those he meets, and he does so while wearing a velvet crown and scepter, naturally.

His outfits don’t just make him stand out in a crowd; they are also held to show respect for the organizations behind the event he is attending. For example, he’ll wear pink for an affair with Susan G. Komen, blue for the St. Louis Blues, and gold and black for U City and Mizzou events.

Boyd’s thoughtfulness extends to all of his endeavours, whether it’s his TV show, his Streetz 105.1 radio show, or his final gig as host of traveling circus UniverSoul. It’s true, Mr. Gary represents Saint-Louis in a tour of twelve cities.

During his circus tour, Boyd will pay tribute to the hospitality heroes who have helped us during the pandemic. Boyd stresses that they are just as important as the people on the front lines and that he wants to celebrate “the people who are in their kitchens cleaning, washing dishes, cleaning COVID hospitals.”

Gary Boyd is Mr. Gary, the host of Hey people!

The college town man always seems to end up using his fame for good, but admits he’s recognized everywhere these days, even if he’s not wearing his crown and velvet jacket. Boyd told us of a time he was caught by fans in public wearing his Mizzou pajama pants. He does not intend to let this happen again. In fact, his plans for the future are big: he hopes to interview Andy Cohen, another King of St. Louis. Boyd says he’s sure Cohen could give him some pointers and that they have a lot in common as they both work constantly to represent St. Louis well in the rest of the country.

We interviewed Boyd a few weeks ago and found him to be even more warm and friendly than he is on his show.

Tell me how you became Mr. Gary.

I came to church: United Methodist Church. I was in the youth group and studied the Bible. We just did so many different things [in church] it prepared me, because I became the president of the youth group, the president of the choir — leadership roles. And then when I went to University City High School, I was the newspaper business manager at the time and the yearbook business manager.

Then I left from there and went to Mizzou. And at Mizzou I [worked] at the financial aid office, that’s how I got to see so many different people from so many different cultures, because they all had to come to me to get their scholarship and grant. And so when people see the show, and they see me wearing the black and gold, that’s me showing my spirit for U City.

So you’ve always been about leadership, and people have always looked to you as a sort of guide.

Yeah, because my very first job was in University City at the pool and at the concession stand. And then in the winter, I worked at the ice rink, and so [I] has always been in that service capacity, providing good customer service, giving people the ability to know that someone cared about them and wanted to see that they were having a good time. Because that’s really what it’s all about. It’s about going out to get great service and create memories.

And now with COVID, people are thinking twice when they go out and spend money. Money is not as easy to find as before. And people pay more attention to it. That’s why I encourage people to avoid chain restaurants and stores and go to these small family restaurants before they disappear too.

My ultimate wish in life is that I would like to see us have a welcome day or week. And that’s something we’re working on now. On hospitality day, you would go to your favorite restaurant and you could tip the people you like. Or you could do some home cooking and take care of your grandmother or your mother or your father. You don’t need Christmas or Thanksgiving to cook and invite them.

We’ve gotten so far away from it all. And I think it all comes down to home training. I always ask people: the way you act now, is that the way you would act in front of your elders? As long as you do this, you will be doing the right thing.

I’ve been to events where you’ve been there too, and I’ve seen you very well stop people if they’re rude or if they’re drunk or whatever. I love that you are the king of hospitality, but you will also shade people into submission.

Because they try you, you know! Here’s the deal: First of all, I’m so St. Louis. Period. I went there, I did it. So growing up in University City is one thing. But then when I finished college and came back, I worked at the Millennium Hotel and then I was assistant manager. I got to see people from all walks of life. And I tell you, I had the pleasure of meeting and having dinner with Diana Ross, with Mary J. Blige, with Elton John, with LL Cool J, with Nelly, with Elton John. I mean, the list is long. These are people who, when you sit down and talk to them one-on-one, just want to talk about St. Louis and what is this place? We have to represent ourselves well.

Thinking back to when I saw it happen — when I saw you shutting people down — yeah, it was always when someone was interrupting or someone was being rude.

And to the young people, I said: “Come and get yours. [Meaning: Please come get your friend and take them away.]

So that’s the whole movement. It’s so easy for us to look at each other and say, “You know what? We all have people in our lives who need extra help. So what can we do to make sure we can all get along a little better?

You never really know when you are making a difference. And when you have people come to tell you how their mother who had cancer looked at you, it means so much. So many incarcerated people have contacted me and said, “Mr. Gary, do you know how you helped me pass my time? You don’t know how good it was to turn on the TV and see the streets of Saint-Louis. To see where we come from.

I always like to leave them a message and say, “Hey listen, y’all need to stop running up those phone bills. You have to get out of there and go home with your children. You have to go out to see your mom.

I just like to leave everyone with a positive message. And I’m so glad to have a platform where I’m able to do that.

Hey people! can be found on KDNL in St. Louis. See the KDNL calendar for times.
Email the author at [email protected]

How the Van Koevering brothers thrived with a disability