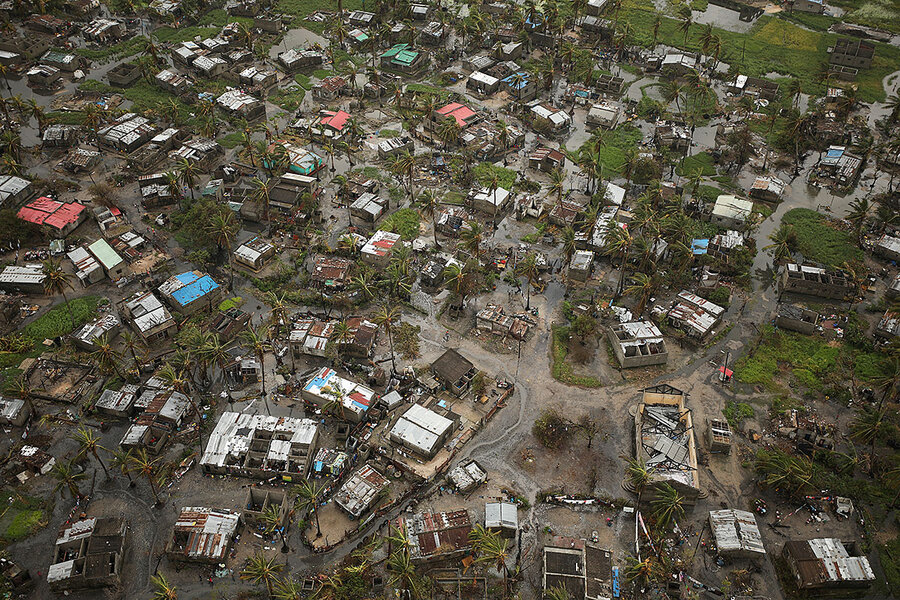 Mozambique city tries to build back better – after lesson from cyclone

When Cyclone Idai ravaged central Mozambique in March 2019, it was a brutal setback for the coastal city of Beira. Its mayor had worked for years with international donors to prepare the city’s flood defenses. Beira had started building a waterfront park and added water retention ponds to manage flood waters during cyclones and other extreme weather events.

The cyclone killed at least 598 people in Mozambique and more than 130,000 had to flee their homes. But the preparation in Beira had not been in vain. The city’s new drainage canals have reduced flooding in some neighborhoods and allowed residents to return to their homes.

Why we wrote this

Preparing cities for climate risks is a priority for developing countries like Mozambique. A 2019 cyclone was a lesson in the promises and limitations of adaptation.

Since then, money and expertise have flocked to Mozambique after donors pledged $ 1.2 billion for post-cyclone recovery. Some projects have yet to be launched, but others are starting to improve the city’s defenses against increased climate-related risks in the future. The hope is that by making Beira more resilient, cities in other developing countries can learn from its example.

And the riverside park is finally open to the public. “It was the mayor’s idea,” says Bontje Marie Zangerling of the World Bank. “He would tell us stories of how for decades the area along the river was dilapidated, still inundated and rife with crime. Transforming him was a really important dream for him.

When a huge cyclone hit central Mozambique in March 2019, Daviz Simango was worried, but he was not surprised.

As mayor of the coastal city of Beira, Mr Simango had seen extreme weather events become more and more frequent, causing flooding that overwhelmed his city’s aging canals clogged with trash. He knew climate change was to blame and his city needed to strengthen its flood defenses.

Since becoming mayor, Mr. Simango, a civil engineer by training, has been working in this direction. He had drawn up a master plan to make the city and its inhabitants flood-resistant by 2035. He had called on the money and expertise of international donors to rehabilitate seven miles of colonial-era drainage canals. . The city had also built a new wastewater treatment plant, started work on a large park, and dug huge water retention ponds around the city to retain flood water.

Why we wrote this

Preparing cities for climate risks is a priority for developing countries like Mozambique. A 2019 cyclone was a lesson in the promises and limitations of adaptation.

That day in March 2019, as the winds of Cyclone Idai were blowing over Beira, Mr. Simango wondered if that would be enough.

In many ways, Beira’s attempts to bolster its flood defenses raised an urgent question: How far could a poor city in one of the world’s poorest countries protect itself from climate change? And what lessons could it offer to other parts of the world facing similar threats?

“We want to avoid being in a vicious cycle of rebuilding it over and over and then destroying it” by extreme weather events, says Bontje Marie Zangerling, senior urban specialist at the World Bank who has worked on the bank’s projects. in Beira.

When Albano António Carige woke up the next morning, much of Beira, a city of half a million people, was underwater.

Beira looked like she had been stripped of parts, said Mr. Carige, a city councilor. He had barely got out of bed that morning when Mr. Simango was at his door, asking for the keys to a city council car so he could get around town and assess the damage.

In the days that followed, Mr. Simango was often seen in the streets with his shirt sleeves rolled up and his half-unbuttoned blue collared shirt soaked in sweat.

“He worked with a chainsaw, cutting down fallen trees in the middle of the street,” recalls Maria Carlos Pedro, a resident of Beira. “His relationship with everyone was the same. There was no difference. With him, it was like that.

A city of scrub

But rebuilding Beira would mean more than just cleaning up the rubble. The floods had submerged the city’s new canals, sending waves of water through its neighborhoods, while high winds hit its buildings. Aerial photos showed tin roofs and tree branches emerging from a soup of brown, murky water. The Red Cross estimated that 90% of the city was damaged.

As the floodwaters receded, Beira overnight became a city of scrub – skeletal frames of buildings and piles of rubble.

“We’ve been building this city for over 100 years, and within hours it all died out,” Simango told NPR in an interview after the cyclone.

For the mayor of Beira, who had spent years preparing for a knockout storm, Cyclone Idai was a brutal setback. Across Mozambique, at least 598 people have died and more than 130,000 have had to flee their homes; Zimbabwe and Malawi also suffered extensive destruction.

But the preparation had not been in vain. Take the city’s new drainage canals that overflowed when the rains fell: neighborhoods adjacent to the canals experienced less flooding overall, and floodwaters receded more quickly, allowing residents to mop up and to move back.

For Selemane Alberto, who lives in Munhava, an area where storm sewers had been improved before the storm, the difference was striking.

“In my neighborhood you wouldn’t take a few steps without walking on water, but [after Idai] it was different, ”he says. “Even if it’s raining, you walk without having to take your shoes off.”

But the storm also clarified how much more remains to be done. While the extent of the flooding was less than in previous storms, cyclonic winds ruffled entire neighborhoods, tearing roofs off and sending trees and power lines crashing through buildings. “If there was no wind,” Simango said at the time, “we might be able to survive.”

The United Nations has called Idai one of the worst weather events on record in the southern hemisphere.

“Suddenly you have a natural event that reveals all the problems – this is the time of disclosure,” says Lizardo Narvaez, senior disaster risk management specialist at the World Bank, who works on the bank’s projects. in Beira. “It’s not that things weren’t like this before. They were. But now you have that momentum and everyone sees what needs to be resolved. “

Mr. Simango already knew very well why it was necessary to act. “Climate change is here,” he told the New York Times in 2018, a year before Cyclone Idai. “Things are changing in the city.

In the weeks and months following the storm, money and expertise poured into Beira. At a conference in Maputo, the capital of Mozambique, in June 2019, international donors pledged $ 1.2 billion for post-cyclone recovery.

“There is a need to rebuild better, to look at infrastructure and community resilience in a different way,” Noura Hamladji, deputy regional director of the United Nations Development Program for Africa, told the conference.

For Mayor Simango, this meant investing in better housing in Beira, so that buildings do not collapse in cyclonic winds. This meant extending the canal system to informal hut settlements where drainage remained uneven. The idea was to fortify the city’s dikes and complete a large urban park, which would serve both as a natural defense against flooding for the city and as a public space for its young people.

Two and a half years after the storm, most of these projects have yet to be launched, which experts say is typical of major reconstruction efforts. The World Bank said it plans to begin reconstruction work on coastal walls and new drainage canals in 2023.

But one project that has been completed is the new park on the banks of the Chiveve River. “It was the mayor’s idea,” says Zangerling of the World Bank. “He would tell us stories of how for decades the area along the river was dilapidated, still inundated and rife with crime. Transforming him was a really important dream for him.

The 108-acre park includes groves of replanted mangroves – a natural defense against flooding – as well as exhibition buildings, restaurants, a market, an outdoor amphitheater, a botanical garden, and outdoor gymnasiums. For Mr. Simango, it was a clean and spacious public space where city residents could spend time.

But the mayor never saw the completed project. In February of this year, he suddenly fell ill. He was airlifted to a hospital in South Africa, where he died on February 22, apparently of complications from COVID-19. He was 57 years old.

Just a week before his death, “we were talking about how we could finish the potholes” and tarring the rest of the city’s roads, says Carige, who replaced him as mayor of Beira. .

Get the Monitor Stories that interest you in your inbox.

But despite Mr Simango’s death, Mr Carige says his predecessor’s legacy will live on in the projects he launched to protect his city from climate change.

“[He] This is why, if you see, the city of Beira has experienced an extraordinary revolution, ”he says.

Three Amazing Jobs You Must Apply For This Week