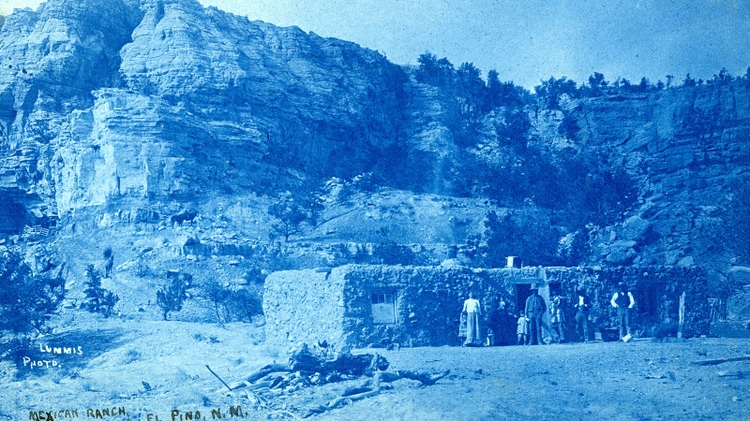 In a recent exhibition design class taught by Professor Devorah Romanek, Curator of Exhibits at the Maxwell Museum of Anthropology at the University of New Mexico, the works of two photographers who have chronicled life in New Mexico were aroused the interest of two graduate students. Class projects, Katie Conley and Paloma Lopez’s online exhibitions, are now available on Maxwell’s website. They highlight the work of American photographers John Collier Jr. and Charles Fletcher Lummis.

The Maxwell has featured online exhibits and other content since the start of the pandemic closure in 2020.

Lummis was a writer, editor, reporter, publisher, archaeologist, ethnographer, librarian, museum founder, environmentalist, Native American advocate, promoter of the American Southwest, and, of the greater interest here, a photographer, explained Romanek, noting: “Lummis was one of a group of people in the late 19th and early 20th centuries who helped attract attention – for better or for worse over the American Southwest to the rest of America, helped put it on the map, so to speak, as a place of interest and a tourist destination.

Lummis’ photos attract attention not only for their scenes from New Mexico, but also because of his use of cyanotypes, a photographic process that renders images in shades of blue.

“I was interested in Lummis because of my interest in photography and the history of photography and its use of cyanotype processes,” said student Katie Conley, who received her bachelor’s degree in photography and her minor in interdisciplinary museum and liberal arts studies with specialization in 2020. his photos offer a unique perspective on the landscapes and people of the American Southwest. You can tell through his images that his perspective comes from the experience and knowledge of so many disciplines like archeology, anthropology, photography, history and journalism.

Cyanotypes, with their telltale blue tint, are quite unstable and easily fade over time, but were easy and inexpensive to make. Cyanotypes were also possible to process in the penumbra of adobe and tolerated impurities in New Mexico well water, Romanek said.

Conley’s video presentation tells the story of Lummis’ 3,507 mile, 145 day trek from Cincinnati to Los Angeles, where he arrived, dressed for the role as an “eccentric frontier.” Along the way, he took over 19,000 images at locations including Acoma, Isleta, Taos, Laguna and San Ildefonso pueblos and was authorized by the Penitents to take photos of their private ceremonies.

Get the Charles Fletcher Lummis: Photos from the American Southwest Exhibition Program here.

The Maxwell holds a small but significant collection of Lummis images, including an album that is “a revealing window into a dense history, a biography of some sort of Charles Lummis himself, and a unique history of the American Southwest. “said Romanek. The UNM Center for Southwestern Research also holds its equipment, photographs and documents.

Lopez touched on the work of mid-20th century photographer and visual anthropologist John Collier Jr. in his presentation.

Collier is so important to the field of mid-20th century American photography and anthropology, establishing the field of visual anthropology, â€said Romanek, adding that he was also fascinating for his life story. and the challenges he overcame after suffering a traumatic brain injury. when he was hit by a car at the age of 8 and then struggled with formal education.

Collier established the field of visual anthropology, taking some of the most wonderful and important American photographs of the mid-20th century, she continued. He was also an important teacher, teaching a generation of photographers and visual anthropologists at San Francisco State University and the San Francisco Art Institute – a position he secured when his mentor, Dorothea Lange, decided not to teach anymore and just passed it off as her. replacement there. Lange is probably best known for her iconic photo of migrant farm worker Florence Owens Thompson and her children.

Collier’s work is in black and white, many of his photos were taken in Taos Pueblo, the nearby town of Taos, the Navajo Nation, and other locations in New Mexico, nationally and in South America. . He also worked for the Farm Security Administration and the Office of War Information. In Ecuador, Collier and his wife Mary took photos for Standard Oil and captured the lives of oil workers and locals.

â€œI’ve actually encountered the work of John Collier Jr. a few times during my college career,â€ Lopez said. â€œI first heard of him as an undergraduate cultural anthropology student at Boston University many years ago, and more recently here at UNM in photography class. So when Professor Romanek mentioned that the Maxwell had this impressive collection of his photographs, I jumped at the chance to learn a little more about him and do my part to help showcase his incredible work. .

In 2003, Mary ET Collier, widow of John Collier Jr., and their son donated to the Maxwell Museum of Anthropology the John Collier Jr. Archives. Comprised of approximately 12,000 printed photographs, 20,000 negatives, dozens of hours of film and John and Mary’s papers, this is one of the most important and important parts of Maxwell’s photographic archive, Romanek noted.

Students Conley and Lopez look to their future after their exhibitions.

â€œAlthough I have enjoyed developing and designing the Collier exhibition with Professor Romanek, my passion is for education. After I graduate, I hope to find a job in the education department of an art museum, â€Lopez said.

â€œI am currently interested in two areas of museum work, one being exhibition design and the other archival work. I’m currently exploring these two areas, â€said Conley. She works part-time at the Maxwell Museum of Anthropology in Exhibit Graphics and part-time at the Center for Southwest Research on various projects in their archives, as well as courses outside of UNM programming towards a Digital Archives Specialist certification. through the Society. American archivists. â€œI really like both areas of museum work and hope to find an interdisciplinary career where I can wear both hats. After obtaining my master’s degree, my ultimate goal is to work in archives or design exhibitions at a national institution serving the American public like the Smithsonian or the Library of Congress.

The best time to avoid traffic when driving in Columbus