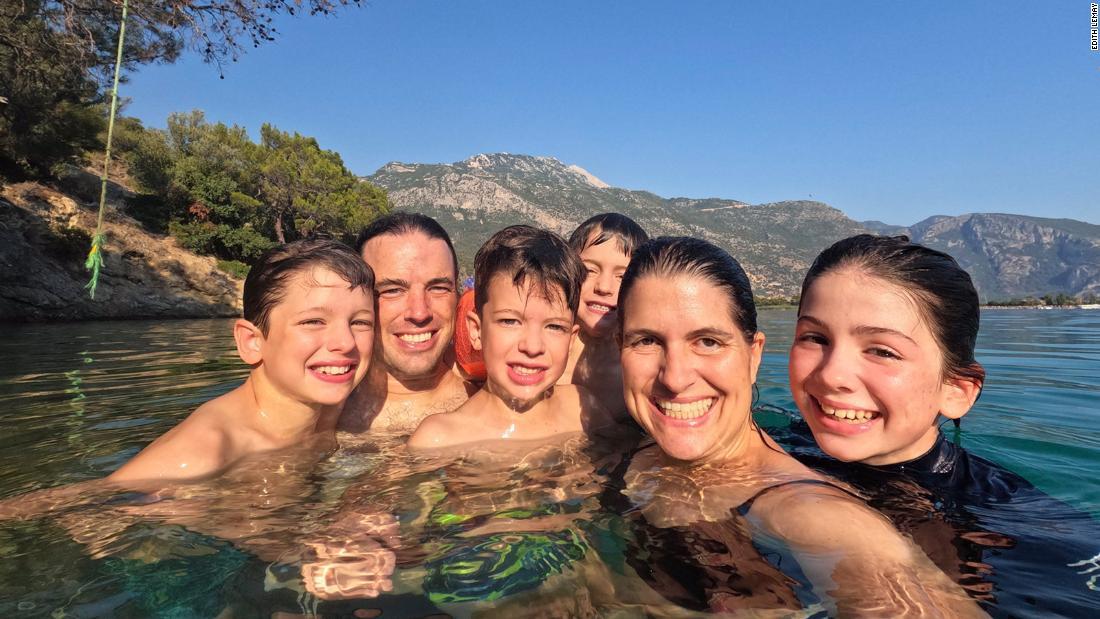 A few years after taking her to see a specialist for the first time, Mia, the eldest of their four children, was diagnosed with retinitis pigmentosa, a rare genetic condition that causes vision loss or decline over time. time.

By this point, Lemay and Pelletier, who had been married for 12 years, had noticed that two of their sons, Colin, now seven, and Laurent, now five, were experiencing the same symptoms.

Their fears were confirmed when in 2019 the boys were diagnosed with the same genetic disorder; their other son Leo, now nine, has been given the green light.

“There’s nothing you can really do,” says Lemay, explaining that there is currently no effective cure or treatment to slow the progression of retinitis pigmentosa.

“We don’t know how fast it will go, but we expect them to be completely blind by the quarantine.”

Edith Lemay with her husband Sébastian Pelletier and their children Mia, Leo, Colin and Laurent in Ölüdeniz, Turkey.

Once they accepted the news, the couple focused on helping their children learn the skills they would need to navigate their way through life.

When Mia’s specialist suggested they absorb her with “visual memories,” Lemay realized there was a truly amazing way to do just that for her and the rest of the kids.

“I thought, ‘I’m not going to show him an elephant in a book, I’m going to take him to see a real elephant,'” she explains. “And I will fill his visual memory with the best and most beautiful images that I can.”

She and her husband soon began planning to spend a year traveling around the world with their children.

While Lemay and Pelletier often traveled together before becoming parents and had taken their children on various trips, taking a long family trip hadn’t previously seemed feasible.

“With the diagnosis, we have an emergency,” adds Pelletier, who works in finance. “There are great things to do at home, but there is nothing better than traveling.

“Not only the landscape, but also the different cultures and people.”

They soon began trying to build up their savings, and their travel pot received a welcome boost when the company Pelletier worked for and owned stock was purchased.

“It was like a little gift from life,” admits Lemay, who works in healthcare logistics. “Like, here’s the money for your trip.”

The family of six was originally due to leave in July 2020 and had planned an extensive itinerary that involved traveling across Russia overland and spending time in China.

The Lemay-Pelletier family explores the Quivertree Forest in Namibia, where they began their world tour.

However, they were forced to delay their trip for years due to travel restrictions imposed by the global pandemic and revised their itinerary countless times. When they finally left Montreal in March 2022, they had few plans in place.

“We actually left without an itinerary,” says Lemay. “We had an idea of ​​where we wanted to go, but we plan as we go. Maybe a month in advance.”

Before leaving, the Lemay-Pelletier family created a kind of list of experiences for their trip. According to Lemay, Mia wanted to go horseback riding, while Laurent wanted to drink juice on a camel.

“It was really specific and very funny at the time,” she adds.

They began their journey in Namibia, where they encountered elephants, zebras and giraffes, before heading to Zambia and Tanzania, then flying to Turkey, where they spent a month. The family then traveled to Mongolia, before moving on to Indonesia.

“We focus on views,” says Pelletier. “We also focus a lot on fauna and flora. We have seen incredible animals in Africa, but also in Turkey and elsewhere.

“So we’re really trying to get them to see things they wouldn’t have seen at home and have the most amazing experiences.”

Along with witnessing beautiful sights while their vision is still relatively strong, the couple hope the trip will help the children develop strong coping skills.

According to national eye institutewhich is part of the US National Institutes of Health, an agency of the US Department of Health and Human Services, symptoms of retinitis pigmentosa usually begin in childhood and most people eventually lose most of view.

“They’re going to have to be really resilient throughout their lives,” adds Lemay, pointing out that Mia, Colin and Laurent will have to constantly readjust as their eyesight deteriorates.

The couple’s son, Leo, while visiting the family in Cappadocia, Turkey.

While Mia, now 12, has known about her condition since she was seven, Colin and Laurent discovered it more recently and are beginning to ask themselves some tough questions.

“My little one asked me: ‘Mom, what does it mean to be blind? Am I going to drive a car?'”, says Lemay. “He’s five years old. But slowly he understands what’s going on. It was a normal conversation for him. But for me, it was heartbreaking.”

For Leo, their second oldest child, knowing about his siblings’ genetic condition has “always been a part of life”.

Lemay and Pelletier hope that spending time in different countries and experiencing different cultures will show all children how lucky they are, despite the challenges that may arise later in life as their eyesight deteriorates.

“No matter how hard their life is going to be, I wanted to show them that they are lucky just to have running water in their homes and to be able to go to school every day with beautiful colorful books. adds Lemay, who says the four children have adapted quite easily to life on the road.

“They’re super-curious,” she says. “They easily adapt to new countries and new foods. I’m very impressed with them.”

While visual experiences remain a priority, Lemay says travel is more about showing kids “something different” and giving them unforgettable experiences.

“There are beautiful places all over the world, so it doesn’t matter where we go,” she explains.

“And you never know what will impress them. We will say [they will think] something is wonderful and then they see puppies on the street and it’s the best thing of their life.”

The family chronicled their trip via social media, posting regular updates on their Facebook and instagram accounts.

Lemay says other people who have been diagnosed themselves or have loved ones with retinitis pigmentosa have reached out to her to offer words of encouragement.

Indeed, a teacher at a special school in Quebec for blind or visually impaired students is one of their 11,000 Facebook subscribers and often shares their adventures with her class.

“Every week, she opens the Facebook page and describes all the photos or reads what I write,” Lemay explains.

“And in a way, they’re kind of part of the journey with us. Being able to share that with other people is a really nice gift that I’m really grateful for. It makes me really happy.”

Lemay and Pelletier say the trip has strengthened the bond between their four children, seen here in Mongolia.

Lemay and Pelletier admit the diagnosis is still on their minds, but they focus on living in the moment and “putting their energy into the positive things.”

“You never know when it can start or how fast it can go,” adds Pelletier. “So we really want to take advantage of this time as a family and meet the needs of each of our children to be able to live this experience to the fullest.”

As the family plans to return to Quebec next March, they say they try not to think that far ahead. In fact, the ability to live in the moment is one of the key things the family has learned over the past few months.

“This trip opened our eyes to a lot of other things, and we really want to enjoy what we have and the people around us,” says Pelletier..

“If this can continue when we return, even in our daily routines, it will be a very good achievement.”

Although traveling as a family was taxing – the couple also homeschooled their children on the road – Lemay and Pelletier say one of the highlights was watching the bond between the children grow stronger.

“They go well together,” he adds. “Plus, I think it helps solidify that bond between them. And I hope that continues in the future, so they can support each other.”

Pelletier points out that they remain hopeful that Mia, Colin and Laurent will never go blind. But for now, they’re doing everything they can to make sure they can handle whatever the future throws at them.

“Let’s hope science finds a solution,” says Pelletier. “We have our fingers crossed for that. But we know it could happen, so we want to make sure our kids are equipped to meet those challenges.”