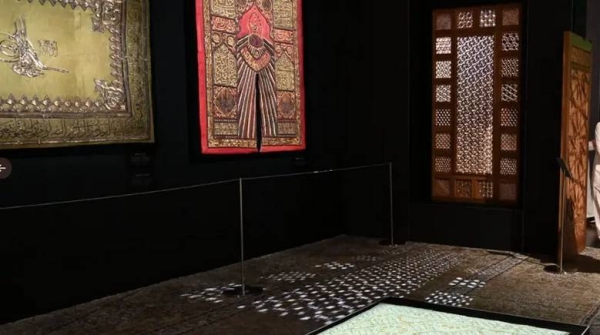 DHAHRAN — A large number of people visit the exhibition entitled “Hijrah: In the Footsteps of the Prophet” at the King Abdulaziz Center for World Culture (Ithra). Exhibits at the event included a copy and design of the shoes of the Prophet (peace_be_upon_him). This is a replica of the original 13th century sandal, as narrated by Moroccan hadith scholar Ibn Asaker in 1287.

The presented copy of the sandal was made by Andalusian craftsmen. These copies were usually distributed to hadith scholars in Islamic capitals, where scholars have the responsibility of preserving and transmitting the teachings and hadiths of the Prophet (pbuh). The exhibits also include fabrics from the Prophet’s Mosque in Medina, manuscripts and valuables from the Prophet.

The Emir of the Eastern Province, Prince Saud bin Naif, recently inaugurated the exhibition, in the presence of senior officials and scholars of Islamic art and history, intellectuals and guests from different countries of the world.

The traveling exhibition lasts for nine months, then it will travel to Riyadh, Jeddah and Medina, and then to a number of cities around the world, with the aim of shedding light on the Hijrah (migration) of the Prophet from Mecca to Medina.

Ithra’s director, Abdullah Al-Rashed, said “Hijrah in the footsteps of the Prophet” is not just an exhibition. “It is rather an integrated qualitative project, presented in a contemporary style, and in an exceptional and original way, through a traveling universal exhibition. The event features an extensive collection of antiques and collectibles, including 14 interactive stations, meticulously designed by local and international experts, as well as a documentary film and a book that tells the story of migration,” he pointed out.

“The center has been preparing and designing the painstaking details of the exhibition for three years, with the help of more than 70 researchers and artists, in collaboration with our partners, to produce an exhibition that rivals international exhibitions, and s away from the framework of traditional presentation methods,” he said.

According to Al-Rashed, the exhibition features a collection of artifacts, including textiles, manuscripts and collectibles, which reflect the richness of Islamic civilization. The idea is to revisit the birth of Islam from a modern perspective and demonstrate an artistic narrative of the Prophet Muhammad’s journey from Mecca to Medina. To mark the start of the Islamic Hijri year, Ithra presents the first exhibition of its kind.

The exhibition, which will continue until April 29, 2023, in the Great Hall of Ithra, offers an immersive and multidisciplinary experience. It also brings together contemporary and Islamic art, tracing the physical route of the Prophet’s journey to explore its historical significance and highlight the human story of the Hijrah.

Dr. Abdullah Hussein Alkadi, one of the world’s leading authorities on the Hijrah, curated the exhibition with Ithra. This is Ithra’s first traveling exhibition to be taken to different parts of the world in its five years.

The Hijrah exhibition is organized in collaboration with the National Museum of Riyadh, the House of Islamic Art, the King Abdulaziz Complex for Waqf and Turquoise Mountain Libraries. Many artifacts provided by all partners are also on display. The exhibition also features collective works created by scholars and artists who sparked this journey through artworks, documentaries and books that tell the story of Hijrah.

Authors in Mold, The Beatles in Flint and Lego across Flintshire