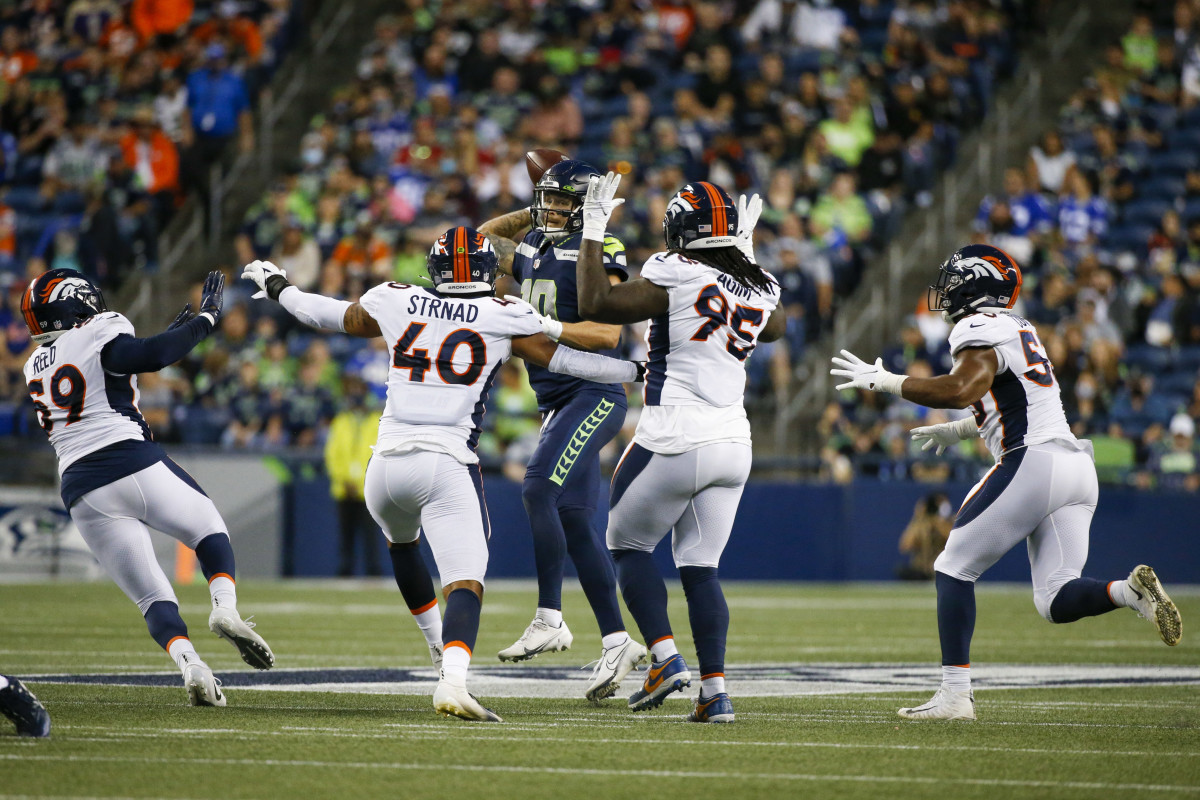 For a second straight week, the Seahawks chose not to play a lot of their starters, and with the opponent adopting a different strategy, the end result was a 30-3 at the hands of the visiting Broncos at Lumen Field.

Seattle failed to score until the second half, with quarterback Sean Mannion leading a field goal early in the third quarter. Otherwise, it was another offensive misfire with the team producing 250 total yards and converting just five of 14 third chances on committing three turnovers. A similar short-handed defense was only slightly better, allowing for two quick touchdowns and three fourth down conversions in the first half.

To put that one-game failure in the rearview mirror, here are five quick observations from a forgettable second preseason competition:

1. There is no reason to panic about a terrible first half performance given the circumstances.

No one on the Seahawks will use it as an excuse, but the Broncos clearly held a substantial talent advantage on both sides of football with most of their starters playing. The two teams have approached this preseason very differently, with Denver trying to determine who will be their starting quarterback for Week 1. To properly assess Teddy Bridgewater and Drew Lock, other starters need to be on the pitch with them. . As for Seattle, the team already know what Wilson can do and most of their starters don’t need to play in those games that don’t count in the win-lose column. With that in mind, while Carroll will certainly not be happy with the way the first half went, there should be no reason to be alarmed. The game went as most should have expected given who was on the pitch.

2. The Seahawks should be grateful not only to Wilson, but also to Geno Smith.

No matter who is behind Wilson on the depths board, Seattle would struggle to overcome it by missing games if that ever happened. But as the past two weeks evidenced, there’s an even bigger drop between Smith and Alex McGough or Sean Mannion. As McGough completed nine of 13 passes in the first two quarters, he threw a pair of ugly interceptions, including telegraphing one to Justin Simmons who was only missing wrapping paper as a Christmas present ahead of time. He also lost a fumble on a backpack that marked a loss of 20 yards. Mannion looked more like a competent NFL quarterback, although he struggled to throw anything beyond five yards and the offense seemed to build it up with the score out of range, begging just let the clock go faster. For all the fans who didn’t appreciate Smith as a backup before, he looks like an All-Pro compared to the other alternatives on the list.

3. A trio of undrafted rookies helped their cause before the last week of camp.

Trying to find bright spots in a 20-point preseason loss might seem as difficult as finding a palm tree in Antarctica, but there was a handful for the Seahawks if you looked past the scoreboard and several. Undrafted rookies may have found great games. Halfway through the second quarter, defensive tackle Jarrod Hewitt recorded his first career sack by rushing from the 3-tech point, quickly reaching Lock and knocking him down for an eight-yard loss. After halftime, running back Josh Johnson interrupted three great runs, finishing with nine carries for 30 yards despite playing behind a struggling offensive line. On the outside, Cade Johnson had three passes for 34 yards from the lunge, converting a pair of first downs with those opportunities. While a place on the roster may not be entirely within the grasp of these players, all of them have improved their cases to be candidates for the practice squad.

4. DeeJay Dallas continues to prove he’s not just a running back, he’s a soccer player.

There is no debate who has been Seattle’s MVP this preseason, as Dallas has done a bit of everything while providing most of the fireworks in consecutive losses. After scoring on a 43-yard touchdown reception in the show opener, the second-year fullback nearly broke a kick return for a touchdown and averaged 36.5 yards per return. on two occasions. Early in the third quarter, he shone on special teams again, entering the backfield to get a punt and give the Seahawks a great starting position on the field. He didn’t get any runs on offense, but added three receptions for 27 yards as a receiver and had to work hard to gain those yards. He appears to have the third running back position in the sack and could also become the team’s new kicking return specialist.

Adding insult to injury – no pun intended – the Seahawks didn’t just lose on the scoreboard in this ugly affair. They also lost several players due to what appeared to be end-of-season injuries. Already running deep at linebacker, Ben Burr-Kirven badly hyper-stretched his knee during the opening kick-off and had to be withdrawn. Later in the second quarter, John Ursua suffered the same fate after falling at the top of a course with a non-contact injury. Although no details were provided on either player, the two injuries did not look good and they were immediately ruled out. Even with rosters reduced to 80 players by Tuesday, Schneider will be looking for insurance in both positions. And it’s possible that Burr-Kirven’s injury will reopen the door when a certain No.50 returns.