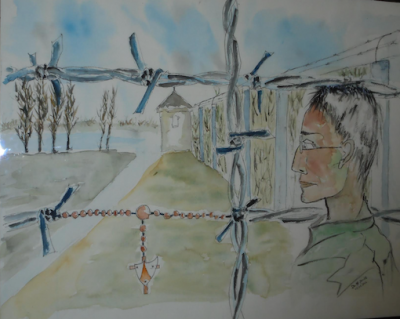 The Carmelites celebrate the canonization of Saint Titus Brandsma

Carmelites from around the world gathered in Rome for a week of celebrations on the occasion of the canonization of Dutch journalist brother Titus Brandsma, who was killed in Dachau on May 15, 1942.

A small group of Brothers, Lay Carmelites and friends from the UK met a larger Irish contingent on the first day at CISA – the International College of St. Albert, near the Vatican. After Mass they saw a special exhibit on Titus who stayed at the College from 1906 to 1909 while studying for his doctorate in philosophy at the Gregorian University and a course in sociology at the Leonin Institute. The archivist gave them a guided tour of the artifacts associated with the saint’s time at the College.

One of the great treasures of the archives is the request sent in 1955 to the pope for his beatification, by survivors of Dachau. Clergy from other denominations as well as Catholic priests were among the signatories to this letter and recorded their Dachau prisoner number next to their signature. They later gave moving testimony of the effect Titus had on them as his cause progressed. This ecumenical dimension is very important because Titus was a pioneer of ecumenism. He was an active supporter of the apostolate of the reunification of the Eastern Churches in the 1930s and also established close ties with Protestant pastors. In 1963, Cardinal Montini (later Paul VI) and Archbishop Josyp Slipyj of the Ukrainian Greek Church, later appointed cardinal by Paul V1, added their names to those calling for the introduction of the cause of Titus.

A beautiful watercolor painted by the current student, Brother Guy Martial de Saint Benoît, O.Carm. from Cameroon impressed everyone. It depicts Titus in profile with the guard towers of the concentration camp in the background. Its wooden rosary is part of the barbed wire enclosure with the Carmelite crest hanging down from the end of the beads. Brother Guy said the canonization of Titus was “a moment of artistic creation for me”. He did the painting in one day. “I wanted to express suffering and prayer,” he says, “that is to say how mysticism opens new spaces to the heart of despair.

A series of pre-canonization conferences and masses were held in various churches in Rome. American Carmelite Father Michael Driscoll from Florida was among the speakers and testified to his recovery from terminal skin cancer by praying to Titus Brandsma and applying a relic of the saints’ garments to his melanoma.

The canonization was a moment of great joy for all the Carmelites present. Carmelite Sisters, Brothers and Lay Carmelites from Holland, Germany, Peru, Trinidad, Caribbean, United States, Spain, East Timor, Philippines, Nigeria as well as various parts of Italy were present. In the evening, a celebration was held at CISA for a selection of guests, including members of the saint’s family. A commemorative medal was presented to cancer specialist Fr. Michael Driscoll. Father Míceál O’Neill O.Carm, Prior General, unveiled and blessed a special plaque to mark the canonization of Titus Brandsma.

The following day, a Thanksgiving Mass was held in St. Peter’s Basilica at St. Peter’s Chair. The main concelebrant was the Cardinal Archbishop of Utrecht. On May 17, a Thanksgiving Farewell Mass in English was held at St Mary Transportina, the beautiful Carmelite Church in Via della Conciliazone. Commemorative medals were then presented by the Vice-General, Father Benny Phang, to the two Dutch Provincials of the Carmelite Brothers and Sisters.

Two new informative books on Titus Brandmsa were presented during the week: one by Fernando Millán Romeral, O’Carm. wrote a concise and inspiring perspective in Truth in Love; the other, The Price of Truth by Miguel Arribas, a Peruvian secular priest who is also a lay Carmelite.

A final Thanksgiving Mass was held in Dublin on Monday May 23 at Whitefriars Church where there is a shrine to Titus Brandsma built to commemorate his time in Ireland before setting off on a lecture tour of America. He had indicated in his correspondence his intention to travel to England to see where Saint Boniface had lived in Crediton, before bringing Christianity to Friesland, where he was assassinated in 731. Titus reestablished the medieval sanctuary of Boniface in his homeland of Friesland and it became a popular center of ecumenical pilgrimage.

The main celebrant was Archbishop Dermot Farrell of Dublin. Irish Provincials of the Carmelite Order and the Discalced were among the concelebrants of the Irish friars. The Ambassador to the Netherlands was present as well as the Dean of St Patricks’ Church of Ireland. Father Fernando Millán Romeral, former Prior General and Vice-Postulator preached. He said the testimony of Titus Brandsma is very important today as a man of peace, reconciliation and ecumenism, urging us to be other Marys bringing Christ to others.

The Mass broadcast live was recorded and can be viewed on: www.whitefriarstreetchurch.ie/

There will be masses celebrated on his feast day, July 27 by the Carmelites in Aylesford and Faversham, where there is a mural of the saint with Edith Stein, the two Carmelite saints of the Holocaust, by iconographer Sr Petra Clare

The Episcopal Conference website has an interesting podcast on St Titus – https://bit.ly/titus-brandsma-podcast