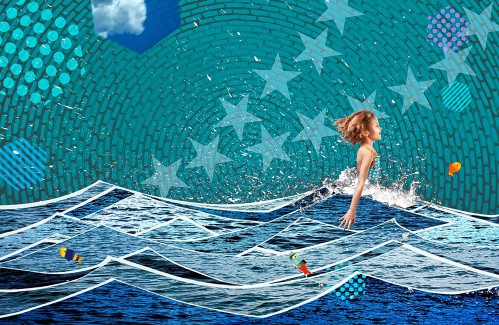 The Eric Carle Museum celebrates its big anniversary with an exhibition on collage, the specialty of its founder

In November 2002, the late author and children’s book artist Eric Carle and his wife, Bobbi, helped open the doors to a new museum in Amherst, one specifically dedicated to exhibiting and collecting art. of picture books, from illustrations to collages to paintings. It was something the couple first envisioned doing after seeing museums in Japan dedicated to this kind of work.

Twenty years later, the Eric Carle Museum of Picture Book Art, which began with just 75 works of art, has over 8,500 such pieces in its collection, representing more than 250 artists. During this time, the Carle has created or hosted more than 140 exhibitions and established connections with museums and galleries across the United States and abroad – a program of traveling exhibitions that reaches more than 500,000 visitors per year, according to Alexandra Kennedy, executive director of Carle.

Now, looking ahead to the next few decades, Kennedy says the museum hopes to build on his work and the global vision of Eric Carle, longtime Valley resident and renowned author of the children’s book “The Very Hungry Caterpillar. “and many other children. books, who died last spring at the age of 91.

“This desire to get picture books out to a wider audience will certainly guide our decision-making and our priorities over the next 20 years,” Kennedy said in an email.

“For us, there is urgency to this work,” she says. “We truly believe that great picture books can bring joy and comfort to children and can encourage us all to be more compassionate and tolerant.”

And fittingly, to mark its 20th anniversary, the museum has opened a new exhibition of the kind of artworks that Eric Carle, just over 50 years ago, helped bring to the forefront of children’s books: collage.

“Celebrating Collage: A 20th Anniversary Exhibition,” which runs through December 31, features more than 90 works in total, and it’s drawn from precisely 20 collage artists, including masters in the field such as Lois Ehlert, Ezra Jack Keats, and Carle himself, as well as young artists exploring new possibilities in the medium.

Nina Crews, for example, creates digital photo collages, fusing a wide range of materials, including photographs, to create prints that shimmer with color and a variety of shapes and perspectives.

To showcase the work of one of Crews’ latest books, “A Girl Like Me”, the museum has collected around 20 different objects – hand-drawn sketches, paper cut-outs, star shapes and water photographs from ocean, sky and a young girl – which the artist combined to create his final images.

Ellen Keiter, Carle’s chief curator, explains that one of the appeals of the exhibition is that viewing the original artwork from the collage books “gives you a real sense of the three-dimensional aspect of art. This is something that is difficult to fully capture in print.

A good example: For the 2017 book “Out of Wonder: Poems Celebrating Poetry”, artist Ekua Holmes created an image of a kitchen table with a spoon and a bowl of oatmeal – and she used real dried oatmeal in the collage. For her 2022 story, “Just Like Me,” Vanessa Brantley Newton uses layers of tissue paper, strips of newspaper, pieces of faux flowers, and other materials to give her work a very textured look.

Artists also provide sometimes amusing testimonials about why they work with collage (text for deceased artists was provided by various scholars and other museum staff, Keiter says). Susan L. Roth, who has illustrated nearly 60 books in her career, lists 10 reasons why she works in this medium. Number one? “I cut better than I draw.”

Roth says she doesn’t paint either. But more specifically, she writes, “It’s fun to piece things together in a totally illogical way until (hopefully) I make it work coherently.”

Amherst artist and author Micha Archer, whose book ‘Wonder Walkers’ was named Caldecott’s Book of Honor late last year, works with oil and watercolor paint , as well as with pen and ink, in addition to collage. She says she often looks for “ways to make the sunlight and shadows dance across the leaves, the ripples shimmer on the water or the grass in the wind. Collage brings me the closest.

What stands out in much of the exhibition is the exquisite level of detail the featured artists bring to their work, hundreds of tiny colored dots that Archer has glued onto paper to create a cobweb in his 2016 book, “Daniel Finds a Poem,” to the dozens and dozens of paper tendrils the late artist Steve Jenkins used to depict the quills of a porcupine in one of his collages.

“This type of work requires a lot of patience and dedication, as well as talent and vision,” Keiter said.

She says it was a challenge to choose the work of only 20 artists for the exhibition, but the museum has made it a priority to bring together a diverse group, taking into account age, ethnicity and background. style. The exhibit includes a light table where visitors can create their own collages using translucent color shapes on the table.

This hands-on exhibit element reflects another aspect of the Carle Museum’s work: offering many art classes and workshops for children (and adults), bringing in guest speakers, and connecting with authors and artists. children’s book stores. Kennedy notes that three of those artists — Jarrett J. Krosoczka, Grace Lin and Mo Willems — have all held online exhibits with the museum during the pandemic.

She says she is struck by how many of these artists – more than 25 – now call the valley home, and how many of them, including Krosoczka, Lin, Willems and Tony and Angela DiTerlizzi, have moved here to over the past two decades. “of Brooklyn and other creative hubs,” as she puts it.

For Kennedy, the Carle’s success can also be measured by the enormous growth of his art collection, which includes picture books dating back more than a century.

“Over 90% of the collection was donated by artists, their heirs and collectors,” she said. “They see the Carle as a suitable home for their cherished work, as it will be preserved, studied and shared.”

Looking ahead, she says the museum is committed to offering more virtual exhibits and programs — a consequence of demand that has skyrocketed during the pandemic — and to hosting hybrid shows that have both an in-person and online component. Le Carle is also beginning to digitize its collection, Kennedy noted, to make it accessible to online scholars.

And diversifying collections and museum programs remains a key goal, Kennedy said: “We will continue to champion the picture books of artists and authors whose voices and visions have historically been excluded by publishers and museums, like people of color and women. .”

For more information on the Carle Museum and ‘Celebrating Collage’, visit carlemuseum.org.