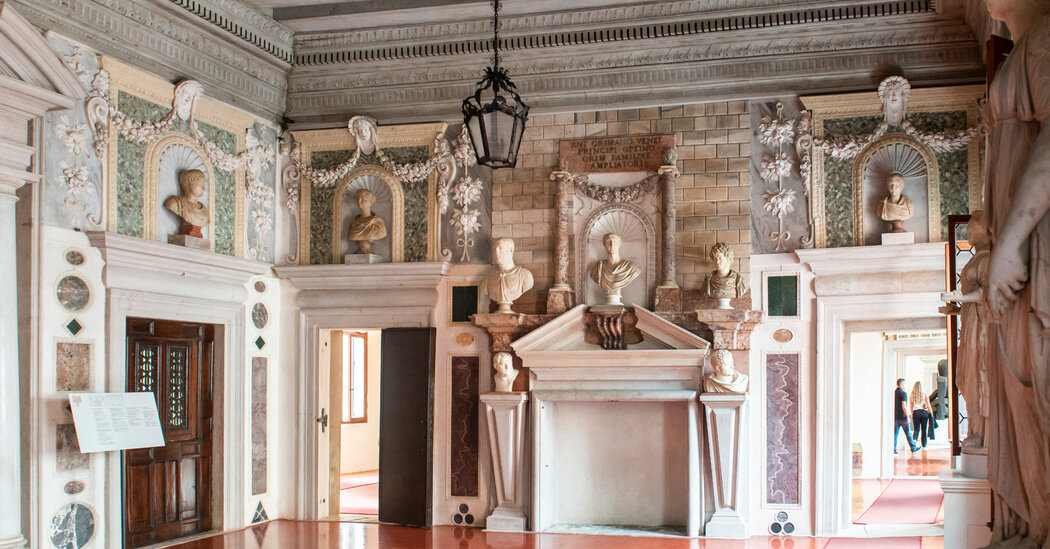 VENICE – Visitors to this city have plenty of opportunities to explore the tastes of visionary, deep-pocketed collectors like Peggy Guggenheim, whose Grand Canal Palace is a treasure chest of 20th-century American and European art, or Francis Pinault, who rotates his contemporary art collection between two Venetian locations.

But it was true even hundreds of years ago. Take the case of the Grimani family.

In the 16th century, their palace near the Church of Santa Maria Formosa, a short walk from St. Mark’s Square, became a must-see for prominent visitors to Venice (including Henry III of France), thanks to the rare and prestigious antique statuary collected by Giovanni Grimani (1506-93), patriarch of Aquileia, and before him his uncle Cardinal Domenico Grimani (1461-1523).

It is the good fortune of modern visitors that Domenico and Giovanni did something virtually unheard of at the time, donating a significant part of their collection to the Republic of Venice on the condition that it be shown in public in a appropriate framework.

“It’s a wonderful gesture,” said Stefania Mason, the author of several books on Venetian collectors. “This is the first case of a donation for public consumption. They wanted everyone to see it,” she said. “It was an exceptional gesture in every way.”

In 1590, the entrance hall of the Marciana Library, in front of the Doge’s Palace, was intended to house the Grimani collection, and the public museum opened six years later. Grimani’s donations eventually formed the core of the Archaeological Museum of Venice, now housed in an elegant 16th-century building on the south side of St. Mark’s Square.

The recent restoration of the entrance hall ceiling and the redesign of the museum layout provided an excuse to bring a number of these classic sculptures back to the Palazzo Grimani after nearly 430 years.

A first batch of sculptures was installed in 2019, in nooks and crannies and on pedestals in the so-called Tribuna, a room built by Giovanni to showcase his collection. They were part of an exhibition called “Domus Grimani”, curated by Toto Bergamo Rossi, director of the non-profit Venetian Heritage Foundation, and Daniele Ferrara, who oversees the Veneto Regional Museums Directorate.

The palace had been open as a public museum since 2008, largely restored but sparsely decorated. Covid notwithstanding, once the statues were on display, visitors to the palace multiplied several times and the Tribuna became an Instagram darling.

(You can see before and after photos of the Tribuna here.)

Last year, another wing of the palace was renovated and around 20 statues were installed in the “Hall of the Doge”, originally an art-rich room honoring the family patriarch Antonio Grimani (1434-1523 ), a spice merchant whose military and political acumen led to his being chosen as doge in 1521.

“I have to say that I didn’t expect this kind of wow,” said Mr. Bergamo Rossi during a visit a few months ago.

Eventually, some works will return to the Archaeological Museum in exchange for other pieces from the Grimani collection, while copies are also made of certain works essential to both places. “Through collections like this, we can piece together the history of the republic,” Ferrara said.

The Grimani family had a head start when it came to collecting. Domenico lived in Rome for many years, mediating between the pope and the Venetian republic. Many ancient sculptures were found on land the family had purchased on the Quirinal Hill, once the site of an ancient Roman bath and garden. All Domenico had to do was dig.

The family’s economic ties to the Adriatic, on the other hand, gave them access to Greek originals. Later, Giovanni devoted his life to buying old works of art, filling the collection with purchases from local peddlers and antique dealers.

When Giovanni decided to renovate the palace in the second half of the 16th century, he called on a stable of Tuscan and Roman architects, decorators and painters, such as Giovanni da Udine, who worked with Raphael in the Vatican, and Federico Zuccari , who painted a monumental staircase. The palace is “really an anomaly”, said Ms Mason, the art expert.

Last year, the palace’s portego – a piano nobile, or ground floor, ceremonial hall – received a facelift when 12 major works by German painter Georg Baselitz were installed in large stucco frames used in the interior. origin for the portraits of the Grimani family. Visiting the palace last fall, gallery owner Lorcan O’Neill remarked that the Baselitz paintings, which will remain on long-term loan, were “so modern, but they completely look like they’ve been there forever. “.

Gagosian Galleries and Venetian Heritage are producing an exhibition of works by American artist Mary Weatherford, which will open at the museum on April 20 during the Art Biennale. Titled “The Skinning of Marsyas”, the paintings are inspired by the Titian painting of the same name.

The relationship between Venetian heritage and state culture officials “has been very interesting” and fruitful, Ferrara said.

In 2020, a private collector decides to sell a portrait of Giovanni Grimani attributed to Domenico Tintoretto. The state had no “immediate resources” to purchase it, Mr. Ferrara said, so he turned to Venetian Heritage, which raised the funds, bought the painting and donated it to the Italy. Naturally, he ended up in the Palazzo Grimani.

“It’s so nice to have him. After all, he is what Venetians call the “paron de casa” or head of the family, Mr. Bergamo Rossi said of the portrait. “And I think he’s very happy to be here.”

Another top pick for this week: Lauren Halsey at the Seattle Art Museum – Slog