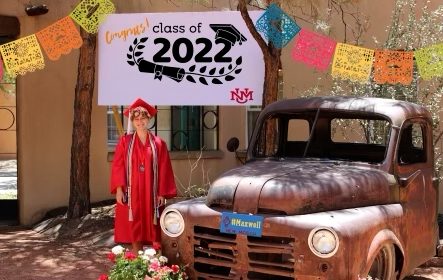 McLean is originally from San Antonio, Texas, but came to study anthropology and public health at UNM. “Service is a big part of my life and always has been. I really love doing things for other people, it kind of helps me find my purpose within myself,” McLean said.

When she came to college, she wanted to find a way to connect with the community she would call home for the next four years. She researched the local American Red Cross chapter and started volunteering in 2018 as part of the New Mexico/Arizona region.

Her supervisor at the Red Cross, Swim Karim, a specialist in volunteer engagement, calls her the “volunteer magician”. “She’s been instrumental in a lot of the work that we’ve done here in the area, in larger parts of Albuquerque and New Mexico in general,” Karim said.

She started out in the organization working on reception, but Karim said they quickly realized she had the potential for more. She started leading volunteer meetings and doing data entry, which eventually led her to produce educational videos for volunteers. To date, the Arizona/New Mexico region is producing a lot of videos thanks to the working model put in place by McLean.

“I’m just very proud to represent Albuquerque, even though I’ve only lived there for a few years, I already know that the people I’ve met there, the memories I’ve made there, the community I’ve been able to be part of it for that period of time, it changed me so much in a positive way,” McLean said.