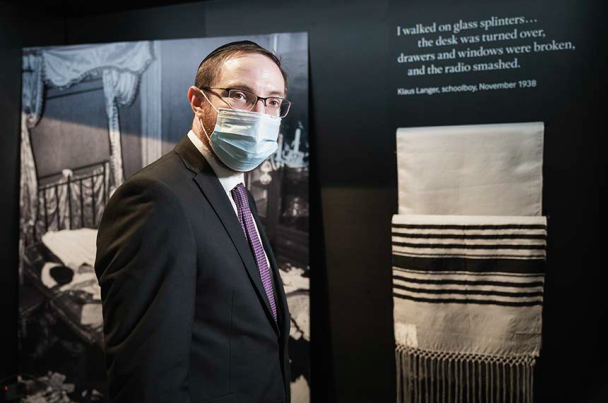 We Cannot Revive the Dead, But We Can Keep Their Memory Alive | Nicky liss

I dreaded this moment, I thought it would open up the trauma again. I didn’t know how they were going to cope that night. That night Sir Martin and I were the speakers. I didn’t have to worry, they were exuberant. It was like they were at a wedding. They kept talking all the time through my speech, through Martin’s speech.

I asked them, why are you so happy? They told me you don’t realize, until this exhibit opened, we didn’t know who would take care of our memories when we were gone. But now that the Exhibition is here, we feel safe, this burden has been taken away from us. “

It is this sense of permanence, the feeling of being remembered and being heard that guided the design and now delivery of the new IWM London Galleries some 21 years later.

The mission to tell the story of the Holocaust is more important than ever. And the many additional artifacts, individual personal stories, and direct testimonies from survivors, along with digital and interactive interpretation, enhance storytelling and understanding of its magnitude incredibly well.

Over the past three years, I have had the privilege of playing a small role in advising curators – whose thought, care and sensitivity have been truly remarkable – on how religious objects should be treated and displayed. This is also the role that led to the overwhelming responsibility of helping to organize the burial of 6 Holocaust victims at Bushey New Cemetery in January 2019.

At first I thought each object I looked at would take a few moments, but I soon learned to think again and appreciate that every object has a story. Some we have discovered and some are yet to be discovered. We hope that visitors to the galleries can help by recognizing the provenance of an object or the face of someone in a photograph.

Items to watch out for include a mini Sefer Torah and a siddur housed by its owner in a reused nail box. There is the fragment of a large Sefer Torah that was disturbingly opened to the words “Lo Tishkach” “Never Forget” and a Rosh Hashanah card sent to the Warsaw Ghetto in defiance of Nazi propaganda from there. ‘other side. And then there’s a Talit that was found outside a synagogue in Vienna the morning after the November pogrom (widely known as Kristallnacht) in 1938, and which I installed in the New Galleries. with the support of restorers specializing in textiles.
There are two items that strike me, however – a Tefillin bag and a Millstone.

The set of Tefillin, was found by Walter Friend, an American soldier, on the body of a concentration camp inmate who died during a forced march. We will never know the identity of this victim; However, I continue to be inspired by his determination and courage to wear his Tefillin despite the dire situation he found himself in. in its window.

The other item, a grindstone, shows the extra effort the Nazis put into their attempts to destroy not only us, but our history as well. The grindstone is a reused Matzeivah, the tombstone of a family’s matriarch, as indicated by an engraving of candlesticks and the words “Our dear mother”. Unfortunately, the stone is cut just before its name is mentioned.

The first part of his epitaph remains and when I looked at the verse used my heart skipped a beat. This is the same verse, as used in the Finchley Synagogue on their Holocaust display, where it refers to all the victims of the Holocaust: “Over these I cry; my eye continually flows with water… ”(Lamentations 1:16)

We continue to cry. We cannot revive the dead, but we can keep their memory alive and through the new galleries we have the opportunity to visit, learn, reflect and be inspired.

The new IWM London Holocaust galleries open on October 20 and are free to visit.

My Charleston Weekend: The weather cools down in time for the cold October nights | Characteristics